Vocalist and guitarist Janet Gardner is ready to “Rev It Up” again. The blonde beauty whose tenure with the band Vixen brought us the hits “Edge of a Broken Heart” and “Cryin’” is back with a vengeance with JSRG; a band comprised of 3/4 of the classic Vixen line-up.

Gardner, along with bassist Share Ross and drummer Roxy Petrucci had been in discussions with guitarist Jan Kuehnemund for several years about the possibility of doing a full-on Vixen reunion. But after several unsuccessful attempts to reunite due to timing issues, the trio recruited guitarist Gina Stile (who, coincidentally had worked with Gardner and Petrucci on the mid-90′s Vixen project, ‘Tangerine’). In order to avoid confusion but still offer fans the “Vixen” experience, the band decided to use their names and become JSRG.

Gardner’s own story is a journey from the high school choir and small town club scene to the biggest stages in the world. She’s shared the stage with some of the biggest rock groups in music history; including Scorpions and Deep Purple. Hers is a tale not only of hard work paying off, but also one of dreams coming true.

Fresh off a successful run on the Monsters of Rock Cruise and M3 Music Festival, Gardner and the rest of JSRG now set their sights on recording new music and performing at this year’s Firefest.

I spoke with Gardner about JSRG, Vixen, songwriting and more!

It was a blast! Everything was so well done. It was such a cool vibe and all of the bands were great! There’s still some confusion over who we are, but people are starting to catch up with it.

Are you working on new music?

Gina and I have been tossing a few ideas around and we’re planning on getting together over the next few months. We’re also coordinating times with Roxy and Share to write and record some rhythm tracks. Our hope is to get it done this summer.

Gina and I  have written a lot together over the years and in many different ways. Back when we were working on the Tangerine album, we had written somewhere in the range of fifty songs. Sometimes she’ll have a guitar idea or a chorus and we’ll hammer it out together. Other times, she’ll play guitar and I’ll play bass. Then we’ll discover some good melody parts and work on lyrics.

Tell me about the origin of the song “Rev It Up”.

Share had been working with Ron Keel. He had a different set of lyrics for the song at the time and Share was the one who came up with the “Rev It Up” idea. She got together with me, and I worked on the melody for the verse. 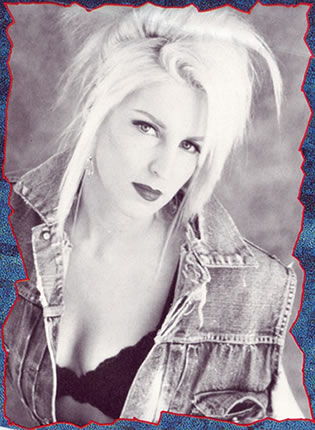 How did you get started in music?

My mom was a pianist and the organist at our church and I would go turn pages for her. I eventually started taking piano lessons myself, but by the time I was twelve I remember really wanting to play guitar badly. My parents finally got me one, and that was the end. I was hooked! The piano was OK, but it was nothing compared to when I was playing the guitar and singing.

When did you decide that you wanted to become a singer?

Growing up, I was actually really shy and would never sing alone in front of anyone. When I would sing, it was always alone up in my room. But I remember it was when I was in junior high school; I was in the choir and no one really wanted to audition for any the solos. Then one day, the director said “Ok, everyone’s going to sing along and I’m going to come around and listen.” As he walked by me he stopped and said, “You’re it. You’re doing it!” and I nearly freaked out. But little did I know, he created a monster! [laughs].

How did you get involved with Vixen?

The cover band I was in was playing a club one night when some girl came up to me and said she knew of a band that was looking for a singer and that I’d be perfect for them. So I gave her my card, but really didn’t think much of it. Then a few days later, I got a call from a manager who gave me a little more info and said he wanted to come down and see me play. So he came out and after he saw me perform said that he wanted to introduce me to the band. So I started looking around for the conspicuous looking guys with long hair. You know, “musician” guys. But then he says, “Oh, they’re over there at the bar.” I look over, and it was a bunch of girls. I had only ever been in bands where I was the only girl, but after meeting them and learning a few of each other’s songs, that was it. Everything just felt right.

What did you find different about being in an all-girl band?

The beauty of it was that there was no weird tension. There’s also less chance of getting involved with someone and screwing up the chemistry of the band. Also, when you’re the only girl in a band with a bunch of guys, there almost always comes a time when somebody’s wife hates you, or a girlfriend wants to beat you up! [laughs]. It was refreshing to not have any of that. Share, Roxy, Gina and Jan are the sisters I never had. 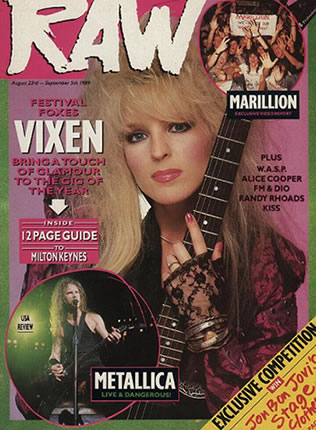 Tell me about making the first Vixen album.

It was an amazing time because we had a major label deal, but as soon as we got into the studio the pressure started to mount. All of a sudden, there were people with their own opinions on what songs we should do, what we should be doing and how we should be doing it. People wanted a say in the matter where before, it was just us. We were just girls from Minnesota and Montana who loved playing live, so it was a bit of a rude awakening.

How were songs chosen for the record?

We originally had a whole bunch of material; a full 90 minutes worth of originals that we had played live. Some of it was a little heavier and maybe not as radio friendly, but the record label had the idea of back loading the album with ten possible singles instead. So a few of our really good songs, ones that we should have fought for, wound up not making it. At the time, we did what we had to do. Having said that, I loved “Edge of A Broken Heart” and “Cryin’” from the first time I sang them.

It was amazing. We started out touring with Eddie Money, which at the time seemed like an odd pairing, but it worked. We played a lot of colleges and were very well received. Then we did the Scorpions tour in Europe and it was “Welcome to the Big Leagues!” [laughs].

Were you ever intimidated being a girl band on the Scorpions tour?

Not really. Everyone was actually cheering for us. We were a little afraid of how we might be received with their audiences, but we worked hard to win them over. Sure, there were some nights when we walked out there and during the first few songs you could tell the crowd was checking us out and probably thinking, “What is THIS? Who are these chicks?” But by the end, pretty much every night we got them.

What would you say are the highlights of your career thus far?

The first show we played with Scorpions in Copenhagen was a great moment. I remember the lights came down and you could hear the roar of the crowd. It was incredible! Then there was the first time I heard “Edge of A Broken Heart” on the radio. It was on KLOS, the premiere rock station in Los Angeles. I was driving down the street and the radio station I had been listening to for the last six years while living in LA had played it. I just about flew out of the car. I was so excited, I couldn’t even drive. I had to pull over and just listen to it. That was a big moment, because I had spent my whole life listening to music on the radio and now, the coolest rock station ever was playing us. Those were both once in a lifetime events.

For more on JSRG, check out their Facebook page by clicking here!

One thought on “Vocalist Janet Gardner Talks JSRG and Vixen”