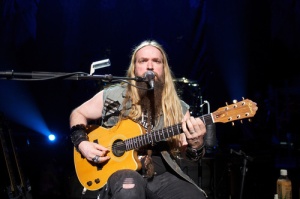 Zakk Wylde has pretty much done and seen it all — and tonight he’ll take the stage at New York City’s Iridium Jazz Club, aka “The Home of Les Paul,” to pay tribute to the legendary guitarist and inventor.

Wylde, known for his incredible six-string skill, work ethic and custom bullseye-painted Gibson Les Paul, was recently invited to perform with the Les Paul Trio at the Iridium tonight, June 10, as a tribute to the late guitarist.

The Iridium celebrates its patron saint (who performed there weekly for more than a decade until his passing in 2009), every Monday night by inviting special guest guitarists to sit in with the trio.

Wylde’s appearance at the Iridium include two additional shows — June 11 and 12 — during which the Black Label Society guitarist will perform acoustic versions of his own material and host a Q&A session and read from his book, Bringing Metal to the Children: The Complete Berzerker’s Guide to World Tour Domination, which recently was released in paperback.

Following his performances, Wylde is scheduled to return home and complete Unblackened, a DVD filmed at the Nokia Theater that also coincide with an accompanying CD. Black Label Society will then begin gearing up for this year’s Gigantour, which features Megadeth, Newsted and other metal greats.

I spoke with Wylde about his Iridium shows and Les Paul. We also discussed his days with Ozzy and Sharon Osborne, two people he still affectionately refers to as “the Boss” and “Mom.”