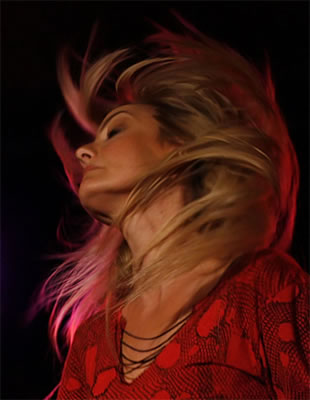 She’s an internationally recognized artist who has sold over one million CDs worldwide; singing, writing and recording music internationally for the past thirty years. She’s a winner of Billboard’s Best Female Rock Vocalist award and has toured and/or worked with the likes of Aerosmith, Alice Cooper, Cheap Trick, Van Halen and Joe Cocker.

But on Monday, August 12th, singer Sass Jordan will do something that she’s never done before: bring her solo material to the StageIt arena for an intimate concert performance for her fans.

StageIt is an online concert venue. One where artists broadcast LIVE interactive performances directly from a laptop or computer to fans all over the world; offering a one of a kind experience you can’t get anywhere else.

In addition to her StageIt performance, Jordan is also busy supporting her Something Unto Nothing (S.U.N) project with guitarist Brian Tichy. The duo will once again bring their “Acoustic Stomp” to the next leg of Queensrÿche’s tour at the end of this month. The stomp is another unique experience in that it allows you to hear every nuance of Sass’ soulful voice in stripped down versions of the songs. Tichy uses only a guitar (along with a kick/hi-hat combo) while Jordan sings and adds her own percussion. creating a really cool vibe.

I spoke with Jordan about her StageIt show and got an update on S.U.N.

Tell me about your upcoming StageIt performance and how fans can join you!

The show is Monday, August 12th at 7:30 pm ET. What you is go to StageIt.com and search for my show. This particular one is called The Good Time Half Hour. There’s no set fee. It’s pay what you want. The cool thing about Stageit is that you can do it from wherever you are. As long as you have a decent internet connection, people can watch it from the comfort of their own home. You don’t even have to worry about going out or driving. It’s another means for artists to promote their music and a cool way to get it to the fans. It may not be the same as being there live and in person, but it’s the next best thing. It’s also interactive, so anyone who’s watching can ask questions and talk to you.

What can fans expect from your Stageit event?

This show will focus on my solo material and I’m also hoping to squeeze in a few covers that I’ve been working on as well. Derek Sharp from The Guess Who will be joining me. This is the very first time we’re doing it and I’m very excited. The Stageit people are fabulous to work with. Brian [Tichy] and I will probably do a future one as S.U.N., but this particular performance is Sass Jordan solo. Eventually, I’d like to do a series of them.

Speaking of S.U.N., can you give an update on the project?

We already have five new songs for the next S.U.N. record and we’re planning to write a few more during our run with Queensrÿche. We’re almost halfway there. We’ll probably be recording the new album the same way we recorded the first one. We had such a great time doing it and it worked so well with the style and genre.

Something Unto Nothing (S.U.N.) Acoustic Stomp Tour Dates: