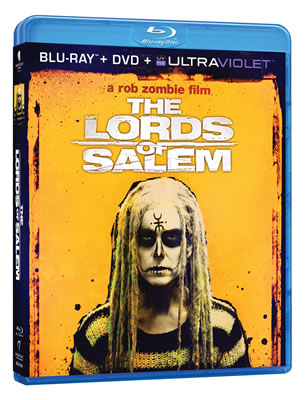 I’ve read quite a few mixed reviews of Rob Zombie’s latest release, “The Lords of Salem”; most of which have either applauded the director for taking a chance on a story about the Salem witches, or berating him for a weak script, uninspired character development and a theatrical plot that seems to go no where.

Having now seen it for myself, I can concur with the latter’s assessment.

The Lords of Salem is Zombie’s third horror film [OK, actually it’s his fifth, but I refuse to count any attempt at remaking the two original Halloween movies]. And whereas Zombie used “House of 1000 Corpses” and “The Devil’s Rejects” to showcase more of the carnage and body count, he takes a more methodical, artistic approach with “The Lords of Salem”.

Local D.J and recovering addict Heidi Hawthorne (Zombie’s real wife, Sherri Moon Zombie) receives a mysterious package at the radio station from a band calling themselves..(wait for it).. “The Lords.” When played on air, the record’s atonal melody evokes a strange response from Heidi and a certain female segment of the listening audience; summoning long-slumbering witches of Salem and drawing them to the only living descendent of their eternal enemy, the Reverend John Hawthorne. Someone who just happens to be…. Yep, you’re right again! Heidi Hawthorne!

Meanwhile, local historian and author Francis Matthias (Bruce Davison) makes a guest appearance on Heidi’s radio show and begins to notice an odd connection between Heidi, the “Lords” record and the history of the town. His investigation leads him to visit Heidi at her apartment building where he encounters a trio of strange women (Judy Geeson, Dee Wallace and Patricia Quinn) who have taken an interest in protecting Heidi. It’s then when things really start to get out of the frying pan and into the fire.

If you’re into a witch coven returning from the 17th century to raise the prince of darkness, you’ve certainly come to the right place. The Lords of Salem is filled with shocking imagery; including some nudity that should not be seen by the human eye. Thankfully (as seems to be the case in every one of his movies) we do get the gratuitous shot of Zombie’s wife’s bare backside to balance things out.

Zombie has described “The Lords of Salem” as what it would be like if Ken Russell directed “The Shining” and indeed, there are elements of this scattered throughout the film, along with a haunting orchestral score.

Although I do have to join the chorus and poo poo him for a weak, cliché script and blase characters, I applaud Zombie for taking the mindless hack and slash out of horror and replacing it with elements of art. I wasn’t so much scared watching “The Lords of Salem” as I was disturbed. And perhaps that’s what the director really had in mind in the first place.