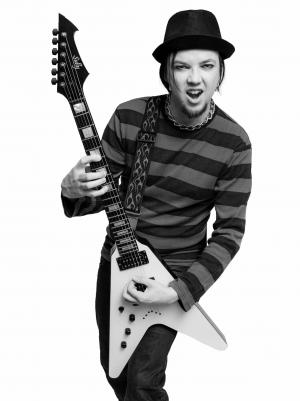 In addition to creating his popular guitar lessons for Metal Method and offering private instruction, Nelson has contributed music to the upcoming Dope album, Blood Money, that’s set for release in 2014.

I spoke with Nelson and got an update on his collaboration with Edsel Dope as well as his new guitar program based on the Phrygian mode. He also explains why developing an understanding of modal theory can be an important tool for guitarists at any level.

GUITAR WORLD: How did you hook up with Edsel Dope?

I met him through my good friends at Wornstar Clothing, Stephen and Sylvia Jense

What can you tell us about the new Dope album? Release date? Sound?

The new album is called Blood Money and will likely be out in the summer of 2014. I’m excited that it will have at least four tracks that I co-wrote with Edsel. One of which is the first track, which already has a video in the can. It looks badass! Dope fans will be very pleased with the visuals and sound!

Read the rest of my Guitar World interview with Dee J Nelson by Clicking Here!