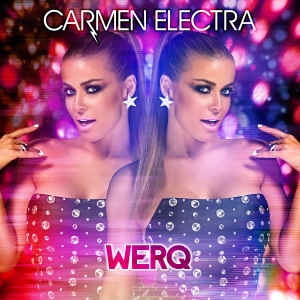 Ever since she recorded her debut album with Prince and opened for him on his Diamonds and Pearls Tour, it’s been a burning passion for Carmen Electra to get back up on stage and perform in front of an audience.

Late in 2012, the former Singled Out, Baywatch beauty officially made her return to music with her infectious single “I Like It Loud”; a track that quickly hit the Top 25 on Billboard’s Dance Club Play Chart.

As the follow-up to ‘I Like It Loud’ Electra’s back with her new single, ‘Werq’. Produced by Eddie Amador, it’s a fun, positive dance track that basically delivers on what it promises: Own what you’ve got… Know your worth … Make it hot.. Make it Werq.

Electra’s also making plans for a full-length album to coincide with US Tour in 2014. I spoke with her about the new single and more.

Was the success of your single “I Like It Loud” what sparked your return to music?

Ever since I recorded my self-titled album with Prince it’s been a passion of mine. That experience alone and then getting to go on tour with him was surreal. A lot of people probably don’t know this, but my original intention for moving to Los Angeles was to pursue music. For some reason though, it wasn’t meant to be at that time. I was going on auditions and getting offers for movies and TV shows and started modeling. That took off, but during this entire time [on and off again] I’ve also been working on music.

What satisfies you the most about the creative process?

The thing I love most is that I’m able to do whatever I want. With music, I’m not playing a role. It’s my project and it allows me more freedom to just be myself.

How did the new single, ‘Werq’ come about?

Orlando [Puerta] from Citrusonic actually worked with me on the record I did with Prince back when he worked at Warner Brothers. He has his own label now and it was through mutual friends that we connected again. He sent over the music track and I just loved the beat and the way it automatically made me want to dance. It really stood out and I could visually see how it would fit into the show that we’re putting together.

What can you tell me about your songwriting process?

I love music that makes me want to dance, but I’m not always in the “dance” or “party” mood, so sometimes we’ll go in and start experimenting. We’ve actually just finished recording a song that’s completely different from anything I’ve done yet. It’s all a learning process.

What other projects have you been working on?

I just finished my 2014 calendar for TF Publishing and am also working on a lingerie line. It’s a lot of work, but I love the challenge.

Did you ever feel pressure or a need to compete when following Jenny McCarthy [Singled Out] or Pam Anderson [Baywatch]?

Absolutely. In one way, it was a huge accomplishment to be the replacement for Jenny and Pam. But on the other hand, there was always that sense of wanting to live up to what they’ve already done. I was so inspired by both of them so there was some pressure, but I tried to not let it take away from the experience. With ‘Singled Out’, it was especially memorable because my whole life literally changed in one day. I get the call and BAM! It was a new life. It was the same way with Baywatch. Both were important times in my life and career.

Do you ever foresee yourself getting more involved in the producing and directing side of things?

At some point I’d love to make the transition. I’ve seen and done a lot, so I think there will be a time where I’ll feel ready to get on the other side of things. But for now, I’m just loving what I do because it’s very fulfilling.