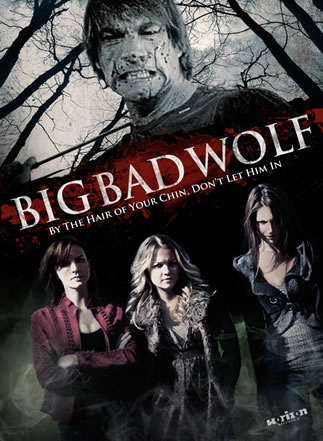 Actress Amber Bollinger is no stranger to the world of horror, having already accumulated a number of them on her film resume. But it was her role in the 2010 scream filled “Pelt” that caught the attention of director Paul Morrell, who asked her to audition for a role in “Big Bad Wolf” (releasing on DVD March 4th). Working together alongside other talented cast and crew, this twisted version soon came to life; exceeding expectation and delivering a thrill ride of scares, screams and sexiness.

A dark, allegorical adaptation of the story of “The Three Little Pigs”, Big Bad Wolf stars former “Bachelor” Charlie O’Connell as Huff, an abusive stepfather living in poverty in California along with his battered wife, Lorelei (Elina Madison) and three teenage girls. On the verge of making a lucrative drug deal that will finally give him the money he needs to escape his misery and retire to Mexico with his mistress, Huff’s plans begin to unravel when his wife secretly gives the drug money to her daughters and encourages them to run away to seek better lives. This series of events triggers a chain of rage-induced asthma attacks, complete with ‘huffs and puffs’ as Huff attempts to locate the three runaways and recover his money. “Big Bad Wolf” also stars Clint Howard, Natasha Alam, Jenna Stone and Elly Stefanko.

I spoke with Bollinger about “Big Bad Wolf” as well as her upcoming film, “Listening” which deals with the power of telepathy.

How did you become involved in Big Bad Wolf?

I actually landed the role based upon a movie I had done called “Pelt”. A mutual friend had introduced me to Paul Morrell, who had seen it and liked my performance. He contacted me through Facebook and asked me to come in and audition.

What attracted you to the story?

I liked the fact that it was a different kind of horror film. It literally is a dark twisted ‘Three Little Pigs’ story.

Tell me a little about your character, Brixi.

Brixi is the oldest of the children and becomes the real mother figure her little sisters never had. She’s the God-fearing, tough one who understands that she may have to take on the role of martyr in order to protect her sisters and get out alive.

It was great and we all got along really well. Charlie [O’Connell] is such a funny guy and not anything at all like his character on-screen. When “action” was called, he became someone completely different. He can turn it on and off at will. Elina [Madison] was great too. She works a lot to get into her character and I really trust her as an actress. You knew that everyday she was going to come in fully prepared and ready to give her all.

What do you think makes for a great horror movie?

I love all kinds of horror films but I think the best are the ones that aren’t apologetic. They’re just brutal, bloody and go for the jugular. That’s what this film does.

Tell me a little about your other upcoming film “Listening”.

It’s a Sci-Fi drama about grad students who are trying to invent mind-reading technology. My character, Jordan helps them along by giving them elements they haven’t seen before. There’s also a government organization involved that’s trying to get the discovery in order to use it on a much larger scale. In a lot of ways, the story is not that far-fetched. There’s a lot of reality to it.