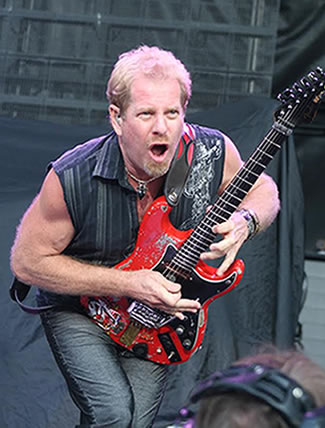 While several Eighties rock bands have gone the “human jukebox” route — touring behind their catalog of hits without releasing new material — Night Ranger continue to buck the trend.

For the band’s new album, High Road, which will be released June 10, Night Ranger take us back to their roots — a time when inspired songwriting, huge guitar riffs and harmony solos and vocals ruled the airwaves. It’s a formula that never gets old.

High Road will be available in two formats — standard CD and a deluxe version, which includes a bonus instrumental track and a DVD featuring a behind-the-scenes look at the making of the album, plus video clips.

I recently spoke with Gillis about High Road, his early years and his biggest career highlight. I also got an update on his upcoming solo project.

GUITAR WORLD: How does a Night Ranger album project begin?

There are three factors we look for whenever we make a new record: big vocals, the sound/song structure and the harmony guitars and vocals. I think it’s great for a band to stick to their roots and what made them famous instead of always trying to delve off into too many new territories and confusing their core audience.