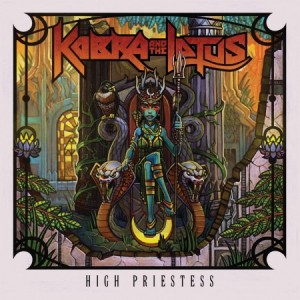 Hard rock and metal fans around the world will find comfort in Kobra And The Lotus’ new album “High Priestess” – and for good reason. Produced by the Grammy-nominated Johnny K (Megadeth, Disturbed, Three Doors Down), “High Priestess” continues to build on the success of the band’s self-titled last album while showcasing a higher level of musical maturity.

But “High Priestess” is not your typical rock album. It’s the combination of hard rock/heavy metal sound combined with classically-trained Kobra Paige’s wailing vocals and hook-laden melodic riffs that makes it so special. Songs like “Willow” and the haunting track “Soldier” showcase Paige’s lyrical vision. Painting a visual landscape of texture that enhances the mood of each track. The result is an insanely good combination of songs that stand out well on their own, yet fit together nicely with each other in terms of style.

Kobra And The Lotus is currently out on the road supporting the monstrous KISS and Def Leppard summer tour. I spoke with Paige about the new album, touring and how a Judas Priest show changed her life forever.

What’s it like touring with KISS and Def Leppard?

Amazing. It’s such a huge honor and so much fun to be a part of.  Every day I go down to the stage when we’re setting up and can’t believe it’s actually happening. It’s a surreal experience.

What was it like working with Johnny K on “High Priestess”?

Johnny is the most inspiring producer. Every day he was ready to create and work with us. He really challenged us to think of things in a different way. It really helps when you’re around someone who is equally excited about what they do. He’s so passionate about what he’s doing and was very invested both emotionally and mentally.

Let’s discuss a few tracks from the new album. “I Am, I Am”.

I actually wrote that song a few years ago, back when we were working on the last album. I remember I came in with it and Johnny put the verse riff in and switched it around a little bit. It has kind of an old school sound and is about being who you are. Either you’re being the seed of destruction or the birth of creation. It’s your choice.

“Soldier” is a tribute to our soldiers and is meant to tug on people’s heart strings a bit – especially with the video. It’s to hopefully bring some perspective that this kind of thing is still going on and there are families out there that are affected by it. It’s to remind people that we’re living a very free life, and we shouldn’t take it for granted.

Where do you find inspiration for your lyrics?

I draw from so many places. I write little notes and ideas down all the time, so there are a lot of different influences on this album. Sometimes when the guys bring me riffs it will actually sound like something physical to me. When I heard the music for “Willow” it actually “sounded” like the story of Bushido to me. Music is not just sonic – it’s something that’s very visual inside of my head. I don’t just hear it, I see it.

When did you know that music was going to be your calling?

I was doing classical training when I was growing up, so I always thought music would be my future. Then I went to a Judas Priest concert and it changed my life. That’s what got me into choosing a “harder” route so to speak.

What excited you the most about the Priest show?

It was a combination of everything. The energy, the eruption of the crowd. The way [Rob] Halford was stomping around and wailing away. I immediately knew there was a place for me – and it didn’t have to be opera. I was taken by all of it and knew right away that it was something I had to be a part of it.

How did the band get its start?

When I was 17, I saw an ad in the classifieds from two guys who were looking for a drummer. They had listed their influences which included bands like Metallica, Anthrax and Skid Row. I loved the list that they had so I emailed them saying that even though I didn’t play drums I’d love to come over and sing. They invited me over and we played “Aces High” [Iron Maiden] and that was it. From then on, it was no covers – just writing. We started making music together.

Did you ever find it challenging being a female singer fronting a “metal” band?

It can be challenging at times. In the beginning, I remember having battles with myself trying to figure out if I needed to be more aggressive or classy. In the end, I realized that I just have to be authentic and stay true to myself.

What excites you the most about “High Priestess”?

We had a great time creating it. This album was a little more exotic in some ways and there’s a lot of versatility on it. I’m really enjoying performing it live as well. We’ve been touring a lot these past few years so it’s nice to be able to do a new expression of ourselves.