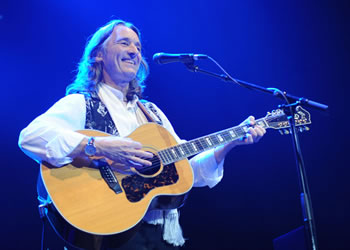 Roger Hodgson has been widely recognized as one of the most gifted composers, songwriters and lyricists of our time.

A co-founder of Supertramp in 1969, Hodgson remained with the band for fourteen years before embarking on a solo career. It was Hodgson’s tenure with the band that became the driving force behind their monumental success. Writing music that defined a generation of progressive rock.

Hodgson wrote and sang Supertramp’s most enduring anthems, including “Breakfast In America”, “Give a Little Bit”, “Take the Long Way Home” and “It’s Raining Again”. Songs which helped the band sell more than 60 million albums. His trademark way of setting introspective lyrics to upbeat melodies resonates in the hearts and minds of people from all over the world.

Accompanied by a four-piece band, Hodgson will bring his rich, musical legacy to the Sands Event Center in Bethlehem, PA on Sunday, Nov 9.

Hodgson talks about his career and what fans can expect from his Bethlehem performance in a recent interview.

What can fans expect from your Bethlehem performance?

People often tell me I am one of music’s best-kept secrets. I have many fans following me around the world because the show I am currently doing with my band is so special. Even many huge Supertramp fans are admitting that the band I have put together actually sounds better than the original, so the audience is in for a wonderful surprise. This year, in addition to my popular duo and orchestral shows, I am performing with an excellent band of four very versatile musicians. They are high caliber musicians and passionate about the music.

You will hear songs that I have written on my life journey – of course I’ll be performing all the songs people want to hear from my time with Supertramp. You can expect to hear “The Logical Song,” “Breakfast in America,” “Give a Little Bit,” “Dreamer,” “School,” “Take the Long Way Home,” “It’s Raining Again,” and “Fool’s Overture”. as well as some of my later material – “In Jeopardy”, “Lovers in the Wind” and “Death and a Zoo”.

Songwriting is an amazing and magical process. For me, the music always comes first. There are usually a few lines of lyrics that come at the same time. For a two or three week period I sing the new song every opportunity I get. It’s like a brief love affair; the emerging song just goes round and round in my head the whole time. It has that consuming quality to it, like falling in love. The structure and melody come to me relatively quickly – the lyric usually takes much longer.

I do realize I have written some wonderful songs and have an ability for writing great melodies, but I think the reason these songs have stood the test of time so well is because they came from a very pure place and were not contrived. I never sat down to try and write a hit song. Music was where I went to be alone to express my deepest emotions, my deepest longing, my deepest pain and joy and questions. And I think that is why the songs have endured so well over time.

Can you tell me a little about your Spiritual connection with your songs?

For me, music was where I went to express my longing to know God, to know true love, my longing to feel truly at home inside myself. I put this inner quest into my songs and I believe, because they came from such a deep place, this is one of the reasons they have such an enduring quality. They touch that place in everyone who is searching for true happiness, belonging, for God – whatever you want to call it.

So, yes, a lot of my songs have a spiritual theme to them – when I write music, I am always alone and it’s very much an inner communion for me. It’s not generally known that I never wrote with the band, and the other members of Supertramp didn’t share many of the spiritual beliefs that I wrote about – so all my songs – new and old – are all very personal expressions for me.

It’s now been more than thirty years since you left Supertramp. Do you have any regrets about it?

When I left Supertramp in 1983, it was to follow my heart, which was telling me it was time to make home, family, and spiritual life my priority. I wanted to be with my children as they grew up. I had become disenchanted with the music business. Supertramp had been my baby, my life for 14 years but I felt a completion. At that point I chose to have my primary focus be my family and not my career. I also pretty much left the music industry and took my family to a healthier place to raise my kids – up in the mountains of Northern California. I moved out of Los Angeles and built a home studio so I could continue to create music and although I made a few albums, I never toured behind them. My kids are now grown and I’m older and wiser and very happy to be touring again these last years.

Contrary to what people believe, Supertramp did not break up because I wanted to start a solo career or because of difficulties between me and Rick [Davies].

Do you ever foresee a reunion of Supertramp?

Many fans used to ask me about a possible Supertramp reunion. Because I knew how much it meant to the fans, I did make an offer to Rick Davies and his agent to join the band for some special Supertramp reunion concerts in 2010, but they declined. So at this point, the time for a reunion has passed. The ship has sailed.

What inspires you as an artist?

One of the things that I like most about making music is how it has brought people together from all over the globe and how many lasting friendships have been made through a common love of my songs. It is a very special and personal connection I have with many of my fans and that the fans have with one another. I feel it’s because my songs came from my deepest longing and joy and pain and touch those same places in the hearts of the people who listen. At my concerts I’m now seeing three generations singing along with me and it’s wonderful to see more and more young people discovering my music.

Roger Hodgson will perform at
The Bethlehem Sands Event Center on Sunday, Nov 9.