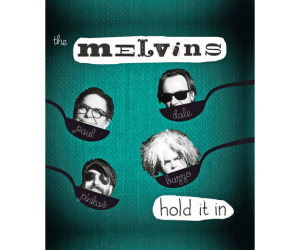 It’s not often you get to work with one of your heroes, but for Melvins guitarist Buzz Osborne, that’s exactly what happened.

Butthole Surfers’ Paul Leary joined the Melvins for their new album, Hold It In, which will be released October 14. Also joining Osborne, Leary and drummer Dale Crover for this 12-song Melvins outing is Butthole Surfers’ bassist JD Pinkus.

Osborne says Hold It In is a refreshing piece of fiction in a boring world of “fact and bullshit.” If Leary’s outside-the-box approach to guitar playing and Osborne’s passion for songwriting are anything to go by, it’s definitely best to just let it ride.

The Melvins will kick off a round of U.S. tour dates October 15 in Sacramento, California. Osborne, Crover and Pinkus will be the touring roster for this run of dates.

I recently spoke with Osborne and Leary about the new Melvins record. I also asked Osborne about his Nirvana connection.

GUITAR WORLD: How would you describe Hold It In?

OSBORNE: It’s a good cross-section of a lot of things we’ve done as well as some things we’ve never done. It’s the first Melvins record I played on where I didn’t write a majority of the material. That was a little different than what we normally do. Paul is also one of my favorite guitar players, and I’ve thought about doing something like this with him for a long time.

LEARY: For the most part, it’s a little fresher and an amalgam album. I wrote three songs on there and we’ve also got Jeff Pinkus, which provided another Butthole element.