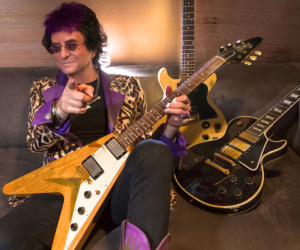 Most rock biographies tend to follow a similar pattern. The artist’s road to redemption is paved with tales of debauchery, drug abuse, marital infidelity and a trashing hotel room or two.

For instance, did you know the founder of such bands as the Ides of March, Survivor and Pride Of Lions was already playing shows alongside Led Zeppelin, Jimi Hendrix and Janis Joplin as a teen? Or that Peterik’s original role in Survivor was one of dual guitarist and lead vocalist?

Peterik’s new book, Through the Eye of the Tiger: The Rock ‘N’ Roll Life of Survivor’s Founding Member, discusses all of that and much more in a look back at the life and career of one of rock’s best songwriters.

With the help of writer Lisa Torem, Peterik reveals stories from his almost 50 years in music. Like the time the Ides of March stole the show from Led Zeppelin or when Peterik unwillingly ceded control of Survivor and took on a diminished role in order to achieve a greater good.

There are revelations of his encounters with Hendrix, Sammy Hagar and Brian Wilson; making studio magic with the late Jimi Jamison (one of rock’s greatest voices) as well as the challenges he faced becoming a husband and father. Oh, and then there’s the little matter of a how a phone call from Sylvester Stallone turned into “Eye of The Tiger.”

Through the Eye of the Tiger is more than just the memoir of a songwriting legend. It’s a classic rock and roll story that’s told through the eyes of someone who has lived through it all.

I had the pleasure of speaking with Peterik about his new book, career and his amazing guitar collection.

GUITAR WORLD: What made you decide to write a book at this stage of your career?

It’s a good time in my life. I’m feeling good and have a lot of stories to tell. Certainly, there are a lot more stories ahead of me and quite a few stories behind me that I wanted to get out.