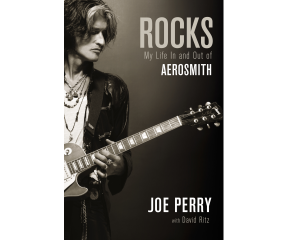 Somewhere after the second British invasion and shortly before the advent of disco and punk, five guys from 1325 Commonwealth Ave. in Boston began finding their niche to take over the world.

They bucked the system at every opportunity, while at the same time set a precedent for a generation of bands that would follow them.

Aerosmith guitarist Joe Perry’s story has been full of ups and downs. Finally, it’s a story worth telling. Perry’s new memoir, Rocks: My Life In And Out of Aerosmith, is an honest reflection of the life and career of one of rock’s all-time greats.

Throughout its pages, Perry pulls no punches in detailing the rise, fall and second coming of one of the greatest bands of all time. Speaking candidly about his early love of the wilderness, his conflicts with authority (includung his refusal to cut his hair in school), the drug abuse, dealing with controlling managers and his stormy relationship with Aerosmith vocalist Steven Tyler.

In addition to a plethora of amazing photographs, Rocks also contains a detailed appendix featuring the guitars and gear Perry has used throughout his career. It’s a treasure trove of information for guitar players and gear enthusiasts.

Perry’s life journey is encouraging, inspiring and at times heartbreaking. But where Rocks really shines is in its ability to showcase a different side of human nature and just what it takes to get along.

I had the pleasure of speaking with Perry about his new memoir as well as got an update on Aerosmith and his next solo album.

GUITAR WORLD: What made you decide to write a book at this stage of your career?

Not too long ago, there was a vibe. It was the 40th anniversary of the band and our last Sony record. There were also a lot of other things going on in our personal lives that made it seem like it was the end of one era and the beginning of another. That’s when my wife Billie asked me, “What do you think about writing a book?” There was something inside me that just clicked and it felt like it was the right time.