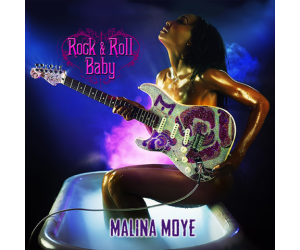 There’s a seductive passion and feel in Malina Moye’s guitar playing, as evidenced by her insanely good new EP, Rock & Roll Baby, which was released October 14.

From the infectious, funk-inspired single “K-yotic” (which features Bootsy Collins) to her take on the Jimi Hendrix classic “Foxey Lady,” Rock & Roll Baby is a high-octane experience of blues power.

In addition to being an in demand performer on her own, Moye also has taken part in the Experience Hendrix Tour alongside guitar greats Buddy Guy, Jonny Lang and Kenny Wayne Shepherd. She also had the distinct privilege of honoring the Queen of England’s 60-year reign by performing her own rendition of “God Save the Queen.”

I recently spoke with Moye about her new album, her gear and more.

How would you describe Rock & Roll Baby?

It’s an in-your-face combination of Led Zeppelin meets Sly and the Family Stone, with a little bit of Hendrix thrown in. I love real music and the feeling it gives you. As a guitar player, I love the freedom of being able to express who I am in my solos. This is me, and this album is what I’m about.

It varies. Sometimes I’ll be on an acoustic and be messing around with riffs. Other times I’ll hear melody in my head and sing it into my phone so I can go back to it later. Then I’ll pick up my guitar and start putting the pieces together. Music can literally speak to you. It will tell you what it has to say. You just have to be open to it.

Let’s talk about a few tracks off the album, beginning with “K-yotic.” What was is like working with Boosty Collins?

Bootsy is incredible. What I love the most about him is how he’s able to spontaneously come up with ideas. I was messing around on the track, jamming, when the idea of having him on it came to me. I remember I sent the track over to him and said, “Hey, tell me what you think of this.” A short while later, he sends me a new track back with a note that said, “This is what I think of it!” [laughs]. It was hot!