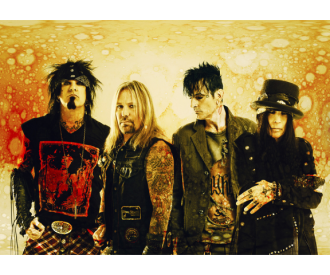 Mötley Crüe recently announced the details of their final round of North American dates.

The tour—Crüe’s last, ever—will conclude on New Year’s Eve in their hometown of Los Angeles, the same city where they began their career more than 34 years ago.

Vince Neil, Mick Mars, Nikki Sixx and Tommy Lee first announced plans for their two-year-long Final Tour last year, when they signed a “cessation of touring” document. It was an agreement that solidified the end of their touring career.

To celebrate their legacy and thank their fans, Mötley Crüe are offering exclusive VIP packages for their final tour dates; these packages include opportunities to meet the band and offer up-close-and-personal views of the show from a newly designed stage setup.

In addition to accumulating worldwide album sales in excess of 80 million units over the course of three decades, Mötley Crüe also have garnered three Grammy nominations, four best-selling books and a star on the Hollywood Walk of Fame.

GUITAR WORLD: With these last few tour dates in LA being announced, has it begun to sink in that this is the last go-around for Mötley Crüe?

Yes, absolutely. This is it. We’re done after this one. I think ending in LA is kind of like coming full circle. Although the place we actually started in, [the Starwood] is torn down and the venues we’re playing now are a lot bigger than when we started! [laughs].

What will you miss about not touring with Mötley Crüe?

It’s a bittersweet thing, but all four of us are still in business together as a corporation. So we’ll still see each other. And even though I may not see the guys on stage, I’ll still be touring myself.

What were some of the challenges the band faced coming up in the LA scene?

From what I recall, a lot of the LA bands that were going around at the time were trying to copy Quiet Riot, who were already signed. So it really came pretty easily for us because we came out with a different look and sound. We were something that was different.

You can check out the rest of my