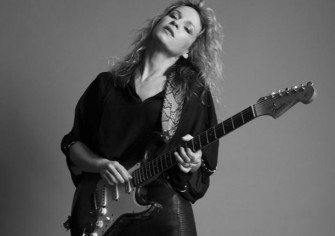 On May 20, guitarist Ana Popovic—who, as we know by now, can play the hell out of the blues—will unleash Trilogy, an epic new three-album set.

The new package is unique because it will highlight Popovic’s tasteful shredding and soulful voice in three different elements: blues, jazz and funk.

Growing up in Serbia under the Milosovic regime, Popovic had to fight for her right to be blue. A battle in which she has obviously triumphed. She’s performed at blues and jazz festivals worldwide, sharing the stage with a veritable who’s who of blues legends.

We recently caught up with Popovic to discuss the Trilogy project—which includes guest appearances by Joe Bonamassa, Robert Randolph and more—plus her role on the Experience Hendrix tour, her gear and more.

How did the idea for Trilogy begin?

I’ve actually had this idea for a few years. There’s always been a little bit of everything on my records: blues, jazz and funk. Fans had always been coming up and telling me how much they loved my sound. They’d tell me they would often make compilation playlists from all of my records. One would say, “I made a set of blues songs for me and another set of jazz songs for my wife.” I thought that was an interesting idea.

Then last year, we had a big incident where our touring van was stolen with all of our gear in it. We were in the middle of a tour and it was through the tremendous support of the fans that we were able to get back on the road. I was so touched by how much they had helped us that I wanted to do something in return. I wanted everyone to have a lot of music but not have to buy three records. I wanted to approach the music from different sides. I’m giving three different sounds of my music to them: three different producers, three different bands and three different recording studios. As a guitar player, that was the biggest goal.

How did you approach writing for this project?

The first official demos for the project began in March of last year. Some of ideas for this album are from a long time ago, because I never give up on the song. I bring ideas to every session, and if it doesn’t match with the band that’s recording it, I’ll leave it. But I’ll never give up on it. I’m always planning and figuring out how they should be done and would always make notes to go with them—Is this jazz? Is it blues? What drummers or producers can I use? Everything was well thought out, and I gave myself a lot of time.