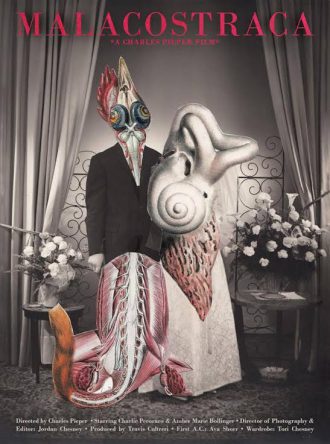 Filmmaker Charles Pieper probably never would have dreamed that an idea he had for a college creative writing assignment would come to life.

But not only will Pieper’s psychological exploration of the fragility of the human mind become a short film, but the talented writer/director has enlisted the talents of actors Amber Bollinger and Charlie Pecoraro as well as practical creature puppetry and special effects by none other than legendary artist, Gabe Bartalos in making his vision a reality.

Pieper sees Malacostraca as a horrifically scary film that’s full of universally relatable feelings and fears. It will have a tone of trapped dread and nature-based horror. Think “Possession” meets “Picnic at Hanging Rock”.

Horror fans can also help bring Malacostraca to life by contributing to the project’s Indigogo campaign, which has already garnered more than $10,000. Pieper and his team have several unique perks available as a thank you for helping to support independent films.

I recently spoke with Pieper about Malacostraca and more in this exclusive new interview.

When did the idea for Malacostraca originate?

This idea for the film actually goes all the way back to 2007. I was in college studying film and had been taking a lot of writing classes. For one of the classes, I wanted to try to come up with the most disturbing image that I could, and something that would even freak me out. I ruminated on that for a while and out came this initial image of a crawdad crawling across a sleeping woman in a bathing suit who had just been swimming. To make things even more uncomfortable, the woman’s husband was watching and almost yelled to wake her up, but then decided not to because he’s morbidly intrigued by what the crawdad is going to do. It was uncomfortable and unsettling. It was the start of this really creepy story and about pushing the boundaries of what I was comfortable writing about. Years went by and I eventually ended up working in L.A. doing stop-motion animation and music videos. I never thought I’d ever be able to do this kind of short film but spent the last two years meeting people and developing it out. Now we’re halfway into a two-month campaign and have already raised more than $10,000!

You’ve got two amazing actors tied to this project in Charlie Pecoraro and Amber Bollinger. What can you tell me about them?

I’ve known Amber and Charlie for a long time. I first met them back in 2009 when I was working on a series that they were acting in and we really hit it off. Amber and Charlie have been friends for a long time and since they’re playing a married couple, they already bring chemistry to the project. In fact, when I revised the short story I wrote it with them in mind as the characters.

How would you describe the story of Malacostraca?

It’s a psychological, relationship horror film with monster elements. To me, the scariest thing in real life would be when your body or mind was working against you while you’re stuck with someone you shouldn’t be with.

How did legendary FX artist Gabe Bartalos become involved in the project?

I used to work for Gabe at his company (Atlantic West) for a few years. We both share similar interests, both in horror and in art. We became friendly and the two of us stayed in touch. Once I felt the script was ready to present I ran the idea past him. He loved it and jumped on board. Gabe almost never does short films like this so it’s very exciting!

Let’s discuss the project’s Indigogo campaign. What are some of the perks donators can receive for contributing?

The most exciting perk happened shortly after we became an Indiewire Project of the Day. Because of that, Creepy Co reached out to us and offered to make us an enamel pin of the baby monster as a perk. They’re a great company that’s made a limited edition run of 300. We brainstormed like crazy to create interesting perks that were different from most campaigns. So you can also get things like original art, prints and even a storyboard artist’s concept design. Every donation helps.

What’s next for the project?

The campaign ends in September and once that’s finished, the majority of the funds will go toward building out the rest of the puppets. We’re hoping to have everything ready to shoot by the end of the year. Once the film is complete, donors who backed it at the $25 and up level will be given early access through a website secret password. As a whole, the movie will be sent to all horror festivals sometime next year.

The most exciting thing for me is the culmination of years of development leading up to this. To see something that I initially wrote as an idea in 2007 become a film and then to have a creature made by one my favorite special effects artists of all time will be the best. Everything else will be icing on top of this terrific cake!