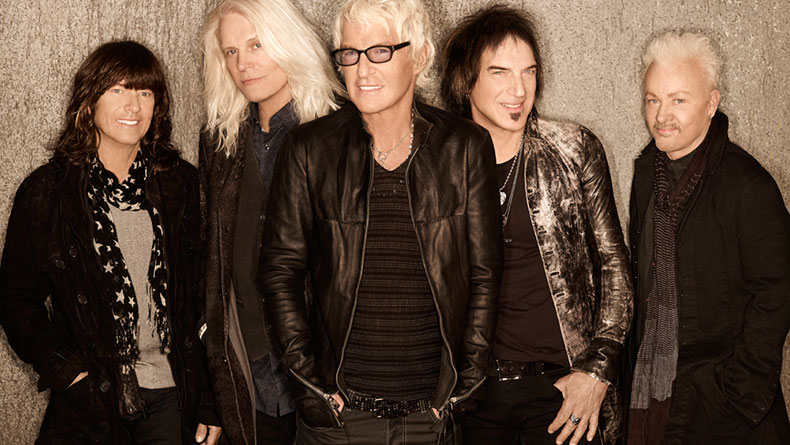 These artists have provided rocking summer soundtracks for the past four decades—and they share a uniquely rich history; REO and Styx have toured together many times over the years and Styx and Felder just completed a five-night residency in Las Vegas. For United We Rock, Felder will open the show with a 45-minute set of Eagles classics along with a few surprises and special guests, while REO Speedwagon and Styx will alternate headlining sets.

But don’t expect the United We Rock triple-bill to be a “hits only” event; REO and Styx have added new material to their set, with Styx supporting their new album, The Mission, and REO performing their rocking new song, “Whipping Boy.”

I recently spoke with REO Speedwagon guitarist Dave Amato about the United We Rock tour, his gear and more.

With a tour loaded with guitarists, I suppose the first question is, who gets to perform “Hotel California” with Don Felder?

Well, Styx recently did a residency in Las Vegas, so Tommy [Shaw] has the seniority [laughs]. Actually, Tommy said he was going to play with Don on “Take it Easy.” He plays a Strat for the first half of the song and then switches to banjo. It’s phenomenal. I still remember when Don first asked me to play “Hotel California” with him; I got goosebumps. I’m not as nervous about the REO set as I am about Felder, because you can’t screw up that solo!

How did REO prep for the United We Rock tour?

We had a few warmup gigs on the weekends for a few months and used those gigs to change the set list around, figure out how to transition into songs and try to do something different. After 28 years, it’s still fun challenging yourself.

Styx has a new album, The Mission, and there’s a new song in REO’s set as well, “Whipping Boy.” What can you tell me about it?

It’s always good to have new music to keep going forward. That was Kevin [Cronin’s] song, and we each added our own two cents to it. We worked on the song on the weekend gigs to get it sounding really tight. It’s actually not even recorded yet. We might record it sometime in the fall.