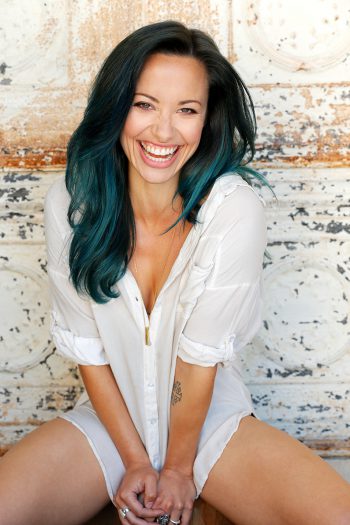 Best known for her portrayal of Aster on the hit web-series, “Anyone But Me”, Nicole Pacent is forging her own path in the ever-changing world of Hollywood.

The beautiful, multi-taleneted actress/singer/producer has a rich resume of work in film and television that’s second only to her extensive theatrical background and infectious personality.

Pacent hosts a successful YouTube channel where she discusses topics that affect many people but ones that are often difficult to discuss due to fear or social stigma.

In addition to the channel, Pacent has several other projects in various stages of production, including a short film as well as an adaptation of Donald Margulies’ “Time Stand Still” – a powerful play about changing relationships and social issues that she plans to stage in the Spring of 2018.

I recently spoke with Nicole about her craft, projects and more in this exclusive new interview.

Was having a career in entertainment something you aspired to do?

Absolutely. From the time I could talk I was intent on being onstage. I grew up an hour outside of New York City, so Broadway and the stage was everything. I started out in musical theatre and even though I didn’t get into “non-musical” plays until high school, I knew I eventually wanted to be in film. I got a great education and then went on to NYU Tisch for Drama. It’s always been the goal for as long as I can remember.

What brought you to Los Angeles?

It was a combination of things. Primarily, it was because I wanted to go into film and I knew there would be more work here. I remember coming out to L.A. for a trial period and being overwhelmed by the fact that the whole city was built around the entertainment industry. There was a momentous amount of opportunity. I fell in love with all of the things I’d heard about and seen in pictures and in movies. It was only a matter of time.

What attracts you most to a project?

It depends on the project. Sometimes it might be the creative team or someone I admire and want to work with. Other times, the project may have a message that feels very close to my heart and one where I’ll have a way to communicate that message in a creative and honest way. Primarily, it’s a good project with great writing and a team that can make it be a good experience.

What are some of the challenges or things you’ve learned as an actress?

Whenever you tell people that you want to be an actor you’re always going to be told what to expect. What’s surprised me though was something that occurred to me as part of maturing. When I was younger, I had this idea of having to package myself and style in a certain way, but that really has been turned on its head. My experience has been to express yourself genuinely and trust that it will be enough. It’s not so much about L.A. or the business as it is about coming into your own as a person.

Was creating a YouTube channel another way to express your creativity?

At first, I tried bringing characters into it and doing interviews. I had started the channel only a few months after my sister passed away, and because of where I was at the time the channel ended up becoming an outlet for me to express what I was thinking about and going through. I started talking about things that were on my mind and people really connected with it. The channel has since become a way for me to process what I’m going through but to also connect with people who may be going through the same thing. The thread that runs through the channel is something that I put into practice during acting school: If I speak the truth then it gives other people permission to feel and speak theirs.

Are there any projects you’re currently working on?

I have two things going on in the immediate future. I recently finished a short film called “Pagg” that’s currently awaiting film festival reaction. It’s the story about a Sikh-American man who goes about his day on the 4th of July with his American wife and child. A bunch of micro aggressions happen against him that culminates with a major aggression that comes his way in a manner that destroys a lot of the identity of his heritage. I feel very strongly about the content of the film and its relevance to what’s happening right now.  It was written and directed by a dear friend and is very poignant and diverse and I’m really excited about it.

The other thing I’m working on right now is a play that will launch in the spring in L.A. called “Time Stand Still”. It was written by Donald Margulies and is a wonderful and timely piece about a wartime photographer and a journalist who are long time partners.

What excites you the most about this next phase of your career?

Getting out of the boxes that I’ve put myself into is what I’m most excited about. Opportunities I didn’t see coming and being able to spread my wings into other areas of film while wearing multiple hats. Instead of just focusing on one thing, embracing the multifaceted-ness of my own talent and what’s possible. It’s an exciting time. There are things I know that are happening and other things I’m not certain of yet but I’m ready.