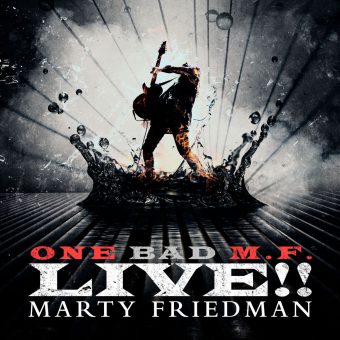 Guitarist Marty Friedman’s monstrous double-live album, One Bad M.F. LIVE!!, is a tip of the hat to the live albums Friedman listened to while growing up. Everything about the album, from the arranging and pacing of the songs to the audience participation and in the moment ad libs, is decidedly old school.

Recorded live this past April in Mexico City, Friedman’s new album showcases the guitar legend’s visceral prowess. Friedman’s band, which features Kiyoshi on bass, Jordan Ziff on guitar and Chargeeee on drums, is also in peak form. Performing tracks from the guitarist’s most recent studio album, Wall of Sound, as well as a selection of infectious fan favorites.

AXS recently spoke with Marty Freidman about his new double-live album, One Bad M.F. LIVE!! [which will be released on Oct. 19], touring, inspiration and more in this exclusive new interview.

AXS: What inspired you to make this new live album?

Marty Friedman: I’ve had a really good vibe with my band for the last few years and wanted to document what I was seeing on the road every night. I wanted it to be an old-school, double-live album because it reminded me of the way I felt listening to live albums as a kid and the whole experience that comes from a live performance as opposed to the studio. I don’t do a whole lot of “old school” stuff but thought it would be a cool chance to capture that feeling.

AXS: Are there any extra set of nerves going into recording a live album, knowing that there’s no going back?

MF: Not really. The only thing I was concerned about was if something were to go down with the mobile recording studio during the set. We only recorded one show, which was kind of a ballsy move. But we’d been on tour for a while and everything was working great. This is a good representation of what it’s like out there!

AXS: Let’s discuss a few tracks from the new album, starting with “Whiteworm.” What can you tell me about it?

MF: That was written right after I got back from this really big event in Buenos Aires in 2015. I played with Astor Piazzolla’s grandson and his band doing all of Astor Piazzolla’s music. It’s a heavy responsibility to do anywhere, much less in Piazzolla’s hometown with an audience of people who grew up with his music. I worked hard to learn how to play that music in a manner where I could give it expression and play it my way without damaging the integrity of what it already is. It was such a great experience and it left me with a lot of residual knowledge. I started to have a bit more of a Latin way of thinking when it came to writing melodies and little hooks and phrases. When I got back to Tokyo to start writing for my Wall of Sound record, I was more at ease with things that were Latin in nature than ever before. That’s how that song came about.