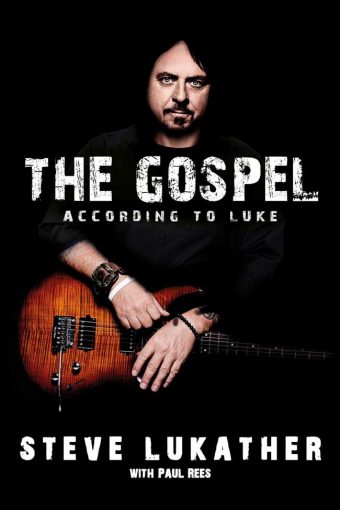 In his new autobiography, The Gospel According to Luke, guitarist Steve Lukather tells the story of how he and his high school friends became the most in-demand session players in L.A., and then went on to form Toto, a band that continues to defy the odds and has sold more than 40 million albums.

Co-written with Paul Rees, Lukather’s biography is an engaging, hilarious and at times tender look into the life of one of music’s most accomplished guitarists and session players. His list of musical achievements alone are enough to fill an entire book. The five-time Grammy winner (and eight-time nominee) has worked with everyone from Boz Scaggs and Paul McCartney to Aretha Franklin and Miles Davis. He was once asked to join Elton John’s touring band and played guitar on Michael Jackson’s Thriller – the biggest selling album of all time. Then there’s his personal, brotherly relationship with the Porcaro brothers and Toto, and all of the highs and lows in between.

The Gospel According to Luke is more than a time capsule of life, love and redemption. It’s a treasure trove of information for anyone wondering what it was like being in the studio and working alongside some of the greatest artists, producers and engineers in music history.

What made you decide to write a book about your life and career? Was it something you always thought about doing?

I originally wasn’t looking to do a book at all. A few years ago I got invited to the Grammy Museum to do a Q&A with Scott Goldman. It was one of those interviews where he asked me questions about my whole career, and I didn’t know what was coming. I remember the room was packed and as I was talking, people were howling in the aisles, laughing at all of my stories. When I came offstage, my agents came up to me and said, “You have got to write a book.” From there, I started getting calls from publishers and it morphed out of that. We spent a few years doing it, editing and rewriting. It was hard because there’s a lot of life I remember clearly, and a lot where they told me I had a good time! [laughs]

How did you become involved in session work?

My father saw being a pro musician as something more attainable than a rock star. I played by ear from the ages of seven to 14 and then took proper lessons. From that point, I met the Porcaro brothers. Both they and their father were session players. I started reading liner notes and following all of the great studio guitar players I looked up to, like, Lee Ritenour, Larry Carlton, Jay Graydon and Ray Parker Jr. I also happened to be geographically placed where I could actually meet these guys. Jeff [Porcaro] knew them all because Jeff was in Steely Dan when we were in high school.