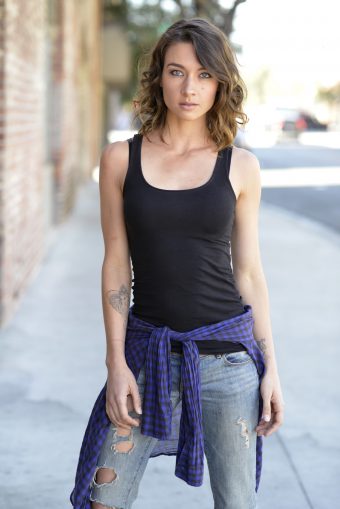 During an exclusive tour of a nine-level, secret prison known as “Death House,” agents Toria Boon (Cortney Palm) and Jae Novak (Cody Longo) become trapped inside its walls after a power outage frees a ruthless army of the world’s most dangerously maniacal prisoners. Trapped in the labyrinth of horror, the agents must push to the facility’s lowest depths, where they’ll come face to face with a supernatural group and discover a dark secret about themselves.

The premise for the B. Harrison Smith directed feature was originally based on a concept by the late Gunnar Hansen (“The Texas Chainsaw Massacre”) intended to bring as many horror legends together in one film. That’s why, in addition to appealing performances of Palm and Longo, “Death House” features a plethora of iconic horror stars from the mid-70’s to present day, including Kane Hodder (“Friday The 13th”series), Dee Wallace (“Cujo” “The Hills Have Eyes”), Barbara Crampton (“Re-Animator”), Tony Todd (“Candyman”), Bill Moseley (“House of 1,000 Corpses”), Michael Berryman (“The Hills Have Eyes”) and Felissa Rose (“Sleepaway Camp”).

As an actress, Cortney Palm has a knack for playing strong, female characters (just check out the beautiful artist’s work in 2012’s “Sushi Girl”) and Agent Boon is another convincing role that’s right in her wheelhouse.

“Death House” is more than just an “Expendables of Horror” film. It’s a gripping tale of good versus evil, the dangers of experimentation, the macabre, and how things are not always what they appear to be.

I recently spoke with Cortney Palm about her role in “Death House” and more in this exclusive new interview.

How did this project come about for you?

In this age of social media people have different ways of reaching out and giving you information about opportunities. In this case, the original lead for the film had to unexpectedly drop out. They were going to start filming and I received a Twitter message from [director] Harrison Smith telling me they were looking for someone. I read the script and was immediately excited. It was a fun, in-depth story about good and evil. About finding what it takes to face your inner demon and coming out on top. I called my agent, flew out a few days later and we made it happen.

What was it about the script that intrigued you the most? Was it the idea of having so many horror icons attached to the project?

Originally, I didn’t know it was being pitched with a lot of horror icons attached to the screenplay. What drew me to the story the most was the strong female lead. I’m always attracted to characters who don’t take anything from anyone else and who can stand on their own two feet.

How would you describe your character, Agent Toria Boon?

She’s a very by the books kind of person. She’s a daddy’s girl, but daddy really wanted a boy. As a result, she’s had to step up her game and trained hard for what she’s doing. As the story unfolds she realizes there’s something she hasn’t been told. Everything is snowballing all at once and she’s not really sure who to believe or trust. She has to follow he intuition and think things through as they happen. She’s figuring out how to survive while at the same time, visions of “Who Am I” keep racing through her mind. There’s also a dynamic, female power trip going on within the film. It’s about who’s on top and who’s going to be the manipulator. The women all have to fight for a place. They all have to be there for each other but it’s still about who’s bite is bigger.

How would you describe the story of “Death House?”

It’s a crazy roller coaster ride, so stay in the cart and keep your legs and hands inside at all times. The story goes into the idea of what happened back in the Fifties and Sixties when the government was performing tests on people. It also dives deep into what it means to have good and evil in the world. The yin and the yang.

Harrison was once a history teacher and was such a good mediator at getting us all to the table and keeping us on the same page. For any issues we had to overcome he was the hub and teacher who kept everyone grounded. He also gave us the freedom to innovate and try new things. Some of that inspiration took the story deeper than what we originally expected.

What did you enjoy most about making “Death House?”

A film I shot a few years ago, “Sunflower,” is getting distributed in the middle of 2019. I also recently wrapped a father-daughter drama called “Two Cents from a Pariah” as well as a voice over for a psychological thriller called “Purple.”  Another film, “Herringbone,” just won the online Sydney Lift Off film festival and is in the festival circuit. It’s a touching tale about two women struggling to survive captivity and torture, as it represents the dairy industry. I’ll also start filming a movie called “Bleed Millions,” that’s directed by Sam Koze, in January. It’s an interesting story about a psychopathic individual who uses the blood of his victims to paint works of art.

Have you ever thought about getting on the other side of the camera someday – either as a writer or director?

I’d definitely consider it. It’s really a matter of finding the right projects. I have a few ideas for a film about unity and casting children as leads. We’ve gotten away from our innocence and the nature of just accepting and being present. That’s something I’d like to explore.

What are you looking forward to the most in 2019?

I’m excited about expanding my horizons and meeting people who are more about the human condition and how it’s represented in film and in our daily lives. Instead of being caught up with unsubstantiated hate towards one another or victimizing ourselves or others, I want to focus on waking up to a collective consciousness. Having people realize their true selves and the beauty the world has to offer. I’m looking forward to helping to influence people in positive ways to make changes so our world can become better place.