Whether I’m out walking my dogs from a safe social distance or driving to pick up much-needed groceries, I can’t help but see members of my community assembling in large numbers at places like parks and shopping centers, despite government and medical professionals advising us to the contrary. It’s become apparent that a vast majority of people are still not taking the Corona Virus (Covid-19) seriously.

Perhaps there’s a reason for this disconnect, because I’ve also read dozens of news articles and listened to a bunch of so-called experts bloviate their opinions. Casting blame for this “virus” pandemic we’re experiencing on everything from a person in China eating a bat, to a biological weapon experiment gone awry, to the new 5G frequency that’s being used for our smart phones. Some are even suggesting that it’s not a virus at all and that the whole thing is nothing more than a crude hoax. In every case, the misinformation given is being shared through various social media outlets where many recipients, who are already unsure and in fear, eagerly accept it as fact without bothering to research it on their own.

The reason I’m writing this is not to fuel debate or cause heated tension. Quite frankly, I’m in no mood to argue. I’d just like to share with you a story that I hadn’t really thought much about until my mother passed away on March 7. I’ll preface what follows by telling you that my mother died of a stroke at the age of 73, and not from Covid-19.

My mom’s mother, Helena (Lyons) Appleman, was born in Easton on April 19, 1914. She was one of eight children from a relatively poor family who grew up to become a wife, mother, seamstress and homemaker, before spending the last nine years of my grandfather’s life being his primary caregiver after he, ironically, also suffered a severe stroke.

Shortly after my brother was born in 1967, when my newly married mother and father had nowhere else to go, my grandparents invited them to move in with them into their small, three-bedroom turn of the century colonial. I came along two years later and was followed by my sister two years after that.

My connection with my grandmother during my formitive years growing up remains my most treasured memory. For, in addition to taking care of my disabled grandfather 24/7, she was also the one who cared for me and my siblings whenever we were sick because our parents were away at work. I remember those days fondly because she’d always have me lie on the soft lumpy couch underneath a mountain of warm blankets; feeding me hot chicken noodle soup and sitting with me to watch shows like “The Price is Right” and “The Joy of Painting,” while getting a much-needed respite from my grandfather, who was taking an afternoon nap.

Every day, unless she was feeling under the weather, she would make supper for my family and would always have extra for any of our friends and relatives who happened to straggle in while we were eating. If I think back now, I can still smell the Sunday roast beef and the Thanksgiving feasts she used to prepare.

My grandmother loved everyone and would go out of her way to do anything to help someone in need. In short, she was the foundation of our family and I remember sitting in wonder as she told me all kinds of stories about what life was like during The Great Depression and World War II. Things I’d give anything to be able to hear from her again because I miss her dearly.

The stories part is where I’m going with all of this, because there’s one story she never told any of us. One that she kept to herself her entire life, and didn’t reveal until she was on her death bed in December of 1996.

One evening, not too long before she passed, my cousin’s husband was at the nursing home visiting her. At the time, he was taking an English course on interviewing and was asking my grandmother pointed questions about her life. Things she always discussed openly. I’m not sure if it was because she was fully aware of her own mortaility, or because she just wanted to get something out that she’d kept bottled up, but she used the opportunty to reveal a little more with one of the questions that was asked.

The question was this: “What was the worst moment of your entire life?”

Without hesitation, she answered. “The day of Clara’s funeral.”

My grandmother explained that Clara was one of her sisters who had contracted the Spanish Flu during the pandemic of 1918 and died shortly thereafter. Clara was ten-years-old at the time and my grandmother was four. We all knew that my grandmother had lost a sister at a young age but were never offered anything beyond that. She never told and we dared not to ask.

My grandmother then went on to tell him that because the funeral parlors were full due to the large number of deaths, they needed to have Clara’s funeral service inside their home. For some reason; one that even I can’t begin to understand, they were unable to get Clara’s casket out of the house after the service, and several men had to work together to lower it through an open window in order to take it to the cemetery for burial. So, in addition to already being grief stricken over the death of her beloved sister, my grandmother had to witness this entire emotional scene of despair and confusion play out in real time. 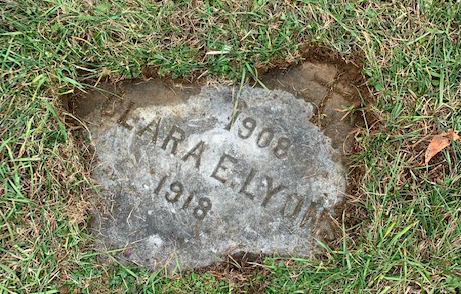 Let me say this again in a way that’s more easily understood. My grandmother, who was four-years-old when her sister died, lived almost eighty years after the pandemic of 1918. She lived through a Great Depression, a World War, the assassination of John F. Kennedy, Vietnam and many other horrific things in our world, in addition to having to be a caregiver to my grandfather and taking care of my family. Yet the absolute worst day of her entire life was when her sister died of the Spanish Flu. The Pandemic of 1918.

So when I see people, a century later, not taking what’s going on seriously, it’s very concerning. My grandmother’s generation never had access to all the information we do today about what’s going on. Even something as simple as washing your hands thorougly and keeping a safe social distance. In 1918 there was no radio, television, smart phones or social media. Heck, you were lucky if you had access to a newspaper. All you had to rely upon was hearsay. Which is why I can only imagine how scary it must have been for her back then, not knowing what was going on.

The truth is you can believe all the hyperbole and conspiracy theories you want because you have that right. But you’ll never be able to convince me that what we’re going through right now is not something to take seriously.

Here’s a little epilogue to take with you. Something that happened on the night of December 31st, 1996. The night my grandmother died.

My grandmother had shared a room for the last month of her life and, on the day after her death, my mom was talking to my grandmother’s elderly roommate.

“Can I ask you a question?” the woman asked my mother, sounding a bit confused.

“Of course,” my mom answered.

“Do you know anyone named Clara?”

My mom looked at her with concern. “Yeah, as a matter of fact I do. Clara was my mom’s sister. She died when my mom was four.”

“Oh, maybe that explains it,” the woman replied with relief. “Because last night, I kept hearing your mother calling out that name in the dark. She said it over and over, and then she was silent.”

One thought on “A Different Perspective: Why You Should Take Covid-19 Seriously”