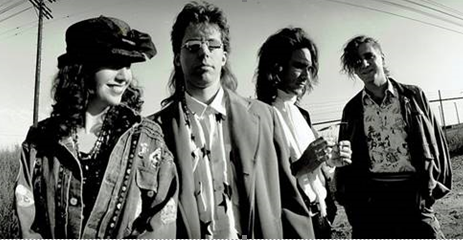 Back in 1989 a behind the scenes group of renowned songwriters and studio musicians, Frank Musker (Queen, The Babys, Air Supply), Elizabeth Lamers (John Denver, Linda Ronstadt, Christopher Cross), Jeff Hull (Brenda Russell, Heart, Chaka Kahn) and Marty Walsh (Donna Summer, Eddie Money, Sheena Easton), decided to get together to record an album. The result was World Goes Round, a powerful collection of pop, inspiration and creativity.

As artists who, at the time, were also heavily involved on other projects, the album was eventually shelved and would reamin unheard for more than thirty years. It wasn’t until guitarist, Marty Walsh, found a cassette tape of the tracks in his basement that the music of World Goes Round is finally seeing the light of day.

The ten-track album, produced by Tommy Vicari (Prince, Billy Idol) and fueled by the infectious lead single, “Big House,” was digitally transferred using 21st century technology. A product of its era conceived in a pressure free setting, World Goes Round sounds as fresh and relevant now as it did more than three decades ago.

I recently spoke with Frank Musker and Jeff Hull about uncovering the World Goes Round time capsule and more in this exclusive new interview.

How did the music of World Goes Round finally see the light of day after all this time?

Jeff Hull: It was when our guitar player, Marty, found the cassette in his basement, listened to some of the tracks and then sent them to everyone. It’d been thirty years since any of us has heard it. What’s interesting is that we weren’t able to find the original multi-track of the recordings. So, we went in and remastered from cassette. We were amazed at how good it sounded.

How did World Goes Round originally come together?

Frank Rusker: I had a house and studio in Laurel Canyon where we would have sessions and worked with A-list players. I was in a relationship with Elizabeth at the time and we were always making music. Elizabeth had been working with Marty Walsh and we were always letting other people use the studio as well. One day, I heard Jeff playing and knew right away I wanted to put him in my orbit. We were all having a lot of success individually but not really making the records we wanted to make. We didn’t have an impetus of creating a working band. We just wanted to make an album that would satisfy our need of depth and personality. When I listen to these songs now, all these years later, they still sound amazing.