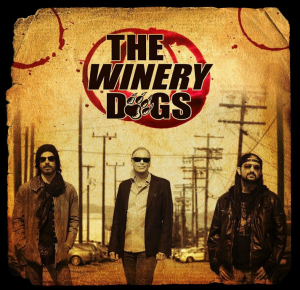 Are they a supergroup? Well, yes.

With guitarist Richie Kotzen (Mr. Big, Poison), bassist Billy Sheehan (Mr. Big, Talas, Niacin) and drummer Mike Portnoy (Dream Theater, Adrenaline Mob) in the mix, how could they be considered anything else?

Just don’t use that moniker around the guys in the band.

“Most supergroups are short-lived and usually have internal problems,” Sheehan said during my recent conversation with all three Winery Dogs. “We didn’t get together to try to capitalize on what we’ve done before. We wanted to do something that was straight out of the box.”

The guys prefer to be considered a classic power trio, and they’ve already released a powerful trio of music videos in advance of their debut self-titled album, which will be released July 23 via Loud & Proud Records. The disc was produced by the band and mixed by Jay Ruston (Anthrax, Stone Sour, Steel Panther).

I recently sat down with Kotzen, Sheehan and Portnoy to talk band origins, gear, the new album and the secrets behind Kotzen’s sound and hybrid picking style.

Read my complete Guitar World interview with The Winery Dogs by Clicking Here!

From his early days with Talas and David Lee Roth, to his time spent with Mr. Big and Steve Vai, bassist Billy Sheehan’s has worked alongside some of the giants in music. But, perhaps there’s no better outlet that allows Sheehan to flex his bass muscle than when he’s working on a NIACIN project. After a seven-year hiatus, Sheehan has once again reunited with acclaimed keyboardist John Novello (Chick Corea, Ritchie Cole) and world-renowned drummer Dennis Chambers (Santana, Parliament) to release KRUSH; a tour de force of sonic blues goodness. Combining exceptional musicianship combined with the rich vocabulary of Hammond B3, it’s a sound that also delves into the territories of jazz and rock without being limited by the boundaries of either.

I spoke with Sheehan about the new NIACIN album as well as his days performing with David Lee Roth. He also reminisces about his very first concert experience: seeing Jimi Hendrix.

How did the Krush project come together?

All of us have been busy working on other project, but our schedules finally worked together and allowed us to get together and do some writing. Our writing process is casual and allows us to dig deep into our past. John and I went to his house, sat around and told stories and played and came up with ideas that over time morphed and evolved into songs. Next, we’ll make a demo with simple drums (just to keep time) and then send it off to Dennis and ask him to wave his magic wand on them. Dennis is the greatest musician I know, on any instrument.

How would you describe NIACIN?

We refer to it as “Bluesion”; like fusion only blues based. Whereas normal fusion is either a combination of jazz and rock or funk, this is more blues based fusion with elements of jazz. The B3 is what takes it down that blues road automatically, just because it’s such an essential instrument. I remember there was a time when I was younger where having a B3 in the band was even more important than having a guitar player.

You can read the rest of my Guitar World interview with Billy Sheehan by clicking here.