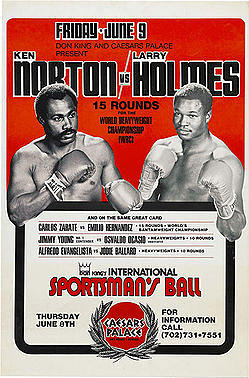 It was June 9th, 1978. I don’t remember much more than that. Heck, at this point I’m lucky enough to remember what happened last month, let alone every little nuance of something that happened thirty-five years ago. I do remember that I was on the verge of being nine years old that summer, and the reason I most likely was oblivious to what was going on was probably because there were reruns of The Incredible Hulk and Dukes of Hazzard on television that night.

But somewhere 2,500 miles to the west of my home in Easton, Pennsylvania history was being made. June 9th, 1978 was the day when a town of 25,000 strong became a household name. It was the day when boxer (and Easton resident) Larry Holmes beat Ken Norton to become the WBC Heavyweight Champion of the World.

Over the next seven years, whenever Holmes would defend his title, it was a holiday in Easton. Newspaper articles, television, man on the street… you name it. Wherever you went, from the back alleys and corner bars on South Side to center court at the high school gym, everyone was talking about the Easton Assassin and whether or not he would vanquish his next foe and emerge victorious.

But in those days, I wasn’t worried one bit about Larry losing the title. I knew he’d always take care of business in the ring. No, my favorite part of the entire night was listening to his introduction:

“From EASTON, PENNSYLVANIA…… THE HEAVYWEIGHT CHAMPION OF THE WORLD…LARRY HOLMES!!!!”

Hearing that announcement come out of my parent’s 19″ color television was something that made me feel special. I mean let’s face it, you’d always hear big city names like New York, Chicago, Atlanta and Los Angeles being announced on television, but you’d never hear anyone say “Easton, Pennsylvania”. It was a surreal moment, because they weren’t just talking about Larry Holmes, they were also talking about ME!

After listening to them announce Larry and my hometown over the airwaves, I’d often wonder how many people around the country were tuning in and asking themselves where the hell Easton was. And even more importantly: that if someone like Larry Holmes already hailed from Easton, what other greatness would soon be coming out of there?

Larry Holmes not only gave us “Eastonians” a voice, he gave us hope and inspired us to be the best we could be. To know that we had a man who carried the weight of our small community with him to every fight was the best feeling in the world. I still remember proudly wearing my black “Easton Assassin” t-shirt, and was even lucky enough to go to school with Larry’s daughter, Lisa.

In a world where MMA fighting has become the norm, it’s sometimes easy to forget just how great things once were. But consider this: Larry Holmes held the boxing title from 1978-1985. He won his first 48 professional bouts (coming one shy of tying Rocky Marciano’s record). His victories over Muhammad Ali, Gerry Cooney, Earnie Shavers, Ken Norton, Mike Weaver, Tim Witherspoon and Marvis Frazier simply can’t be ignored. 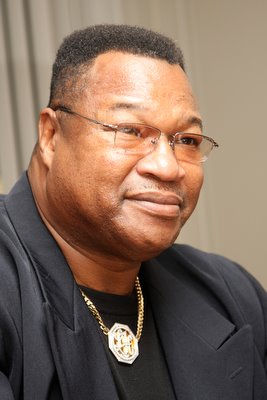 After losing the title and a rematch to Michael Spinks (and when many people in the sport believed he should have been finished), Holmes made several comeback attempts.

He fought a young Mike Tyson when Tyson was a monster in the ring (and before he had started acquiring a taste for auditory organs). Larry then managed to add even more victories and title shots to his record (including falling short in a split decision to Evander Holyfield), before ultimately retiring for good.

But perhaps the greatest thing that makes Larry a champion to me was the fact that rather than hit the road for greener pastures once success came calling, he decided to stay in Easton and invest much of the money he earned from the ring into his hometown.

Holmes was instrumental in developing restaurants, nightclubs, a training facility and even an office complex in the town he gave credit to each and every time he stepped into the ring. In his honor, the city of Easton fittingly changed the name of Riverside Drive, the main thoroughfare that connects the Pennsylvania and New Jersey borders, to “Larry  Holmes Drive”. An apropos gesture, because Larry Holmes connected us.

Some people might be able to boast about having a Hollywood star or a musical genius in their hometown while growing up, but not many can say they have a champion and a legend. I can.