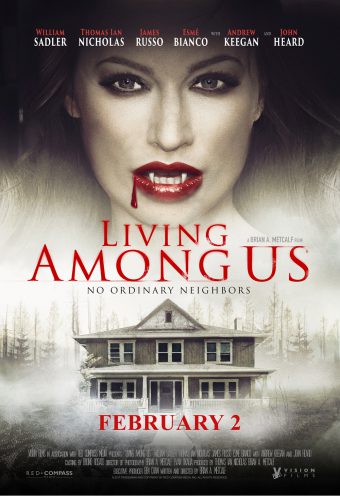 Perhaps best known for his role as Kevin Myers in the “American Pie” films, multi-talented actor/producer and singer/songwriter Thomas Ian Nicholas continues to entertain audiences with his clever filmmaking and passion-driven acumen. Nicholas’ new horror film, “Living Among Us” continues this trend by also applying a new twist on the methodical vampire genre.

The film, written and directed by Brian A. Metcalf, is a fictional found-footage documentary where Mike, (played by Nicholas), and two members of his team are invited to film a group of vampires in an attempt to prove or disprove claims of the undead mythos. The documentary crew soon finds themselves in extreme danger after uncovering a deadly secret, and a fight for survival ensues.

Like many found-footage films, “Living Among Us” shines by delivering seemingly helpless characters in a visually appealing environment as well its use of extended takes. One scene in particular, which takes place in the dining room, will have audiences talking long after the credits have rolled.

“Living Among Us” also stars Andrew Keegan, Esmé Bianco, William Sadler and John Heard (in one of his final film roles).

An acclaimed musician, Nicholas and his band are also gearing up for a new tour this year in celebration of the 10th anniversary of his album, Without Warning.

AXS recently spoke with Nicholas about “Living Among Us”, his music and more in this exclusive new interview.

AXS: How did your involvement in “Living Among Us” come about?

Thomas Ian Nicholas: I have a production company called Red Compass Media, where my business partner, Brian A. Metcalf (writer/director), and I have a slate of projects we’re doing. The first one was “The Lost Tree”, which recently came out on DVD and Blu-Ray and stars Michael Madsen and Lacey Chabert. “Living Among Us” is the second of three that we’re doing. It’s very exciting.

AXS: What was it about this particular story that piqued your interest?

TIN: When we were finishing up “The Lost Tree”, we had the opportunity to do another project. What they wanted was a found-footage film, but one that included an all-star cast. Brian is a film buff and told them that you can’t really do a found-footage film with well-known actors because it would be too difficult for viewers to believe. He suggested that we do a documentary-style American New Wave film. A movie within a movie. One where you’re fully aware of the filmmaking process but are still drawn into the story.

The other thing I really dig about this film is that it’s a new twist on the subject of vampires.