Originally intended to be part of double-compilation called Blood Red Viral Black, The Alarm’s infectious new album, Sigma acts as the sequel to 2018’s critically-acclaimed Equals and features contributions from such musical giants as original Alarm guitarist Dave Sharp and Billy Duffy from The Cult.

Sigma, as well as its predecessor, mark a creative change for Peters, who crafted most of the songs from lyrics he’d written while he and his wife, Jules, were going through cancer treatment. The result is a second volume of material fueled by heartfelt emotion, angst, and revelation.

In addition to the new album The Alarm will soon embark on one of summer’s most highly-anticipated tours, where the alternative British rockers will join post-punk auteurs Modern English and the charismatic Jay Aston’s Gene Loves Jezebel on what’s being hailed as The Sigma LXXXV Tour.

Peters’ Love Hope Strength charity will also host bone marrow drives at each concert aimed at finding finding donors for people suffering from blood cancers. To date, the charity has registered in excess of 200,000 people, with more than 4,000 potentially lifesaving matches.

Sigma will be released on Friday, June 28.

I recently spoke with Mike Peters about the new Alarm album, touring and more in this exclusive new interview.

How does the new album compare with some of The Alarm’s previous work?

Mike Peters: It’s very much a sequel from our last record, Equals, which came out last year. The music of both albums was conceived at the same time. Originally, it was going to be a double-album called Blood Red Viral Black, but on the eve of release we decided to switch focus and release a single album, Equals, with the knowledge that a sequel would be released twelve months later. There’s a lot of connection between the two records.

The material for these two albums came about a little bit differently than what you’ve done in the past. Can you talk a little about the songwriting process?

In times gone by I’d usually start at the top of the mountain. Where you’d have that initial expression, phrase or chorus, and then you’d work your way down to find the bridge, verse and finally, the lyrics. With this set of music I started at the bottom of the mountain with lyrics first. A lot of songs came out of the turmoil of the situation when I found myself relapsed from the leukemia I’ve carried most of my adult life. At the same time my wife, Jules, was diagnosed with breast cancer, so it was a double whammy. I put everything on hold while we faced this challenge together. There were lot of places where I found myself threatened, emotionally, and I’d write down my feelings. It was only after we came through the worst of these times that I showed my wife all the things I’d written down. That’s when she said to me “This is the start of a new Alarm record. Then I printed all the lyrics out and laid them on the floor around me and started looking for the music in the lyrics to go back up the hill. These albums are very different from how I’ve worked in the past. It’s been quite liberating. 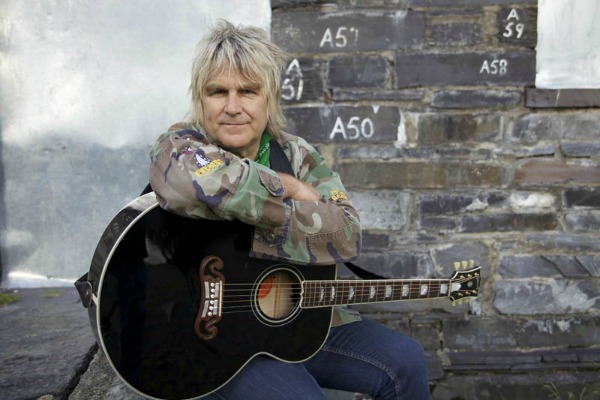 The story behind Mike Peters’ inspiring new documentary, Man in the Camo Jacket, actually begins with the music of the Alarm.

Peters’ will to live also comes through his charity, the Love Hope Strength Foundation, which raises funds and awareness for cancer centers around the world through music-related events and promotions. To date, LHS has added more than 129,000 music fans to the bone marrow registry, helping to find more than 2,400 potential lifesaving matches.

Man in the Camo Jacket will have its U.S. premiere in Los Angeles on April 22 and in New York on April 29. This will be followed by the Alarm’s run of live dates as part of the Vans Warped Tour.

I recently spoke to Peters about Man in the Camo Jacket, the Alarm’s upcoming tour, new music and more.

What inspired Man in the Camo Jacket?

The genesis of the film happened when I was approached by Russ Kendall from Kaleidoscope Pictures. He had been commissioned to make a series of programs for a film called A Song That Changed My Life. Russ and his crew came to Wales to film my portion. While he was there, I told him the story about our work with the charity and the bone marrow drive and he became enthralled with the whole Love, Strength, Hope story. That’s when he said, “Mike, this is more than a TV show. This has to become a film.”

He started the drive with the other producers [James Chippendale, Stash Slionski and Alex Coletti] and put the story together. The film is the coming together of a lot of people who had faith in the band and me as an individual and stood behind me through my cancer struggles, and also about the people who got on board and volunteered to give their love, hope, strength back to the world.

What’s the story behind the camouflage jacket?

When I was first diagnosed in 1995, I was due to have a bone marrow transplant. But I told the doctors I had an American tour in a few days and couldn’t cancel it. A friend of mine gave me a book about self-healing to read on the way over, and there was a chapter about a girl who had a brain tumor and created a Pac-Man game in her mind to eat it.

She wound up going into spontaneous remission and cured herself through the power of her mind. It really connected with me and made me realize I needed a defense mechanism of my own. I thought that if I was going to war with the cancer, I was going to buy an army jacket and wouldn’t take it off until I was cured.

One of the interesting parts of your musical journey was when one of your early bands, Seventeen, dissolved. It was the day you were told by the band’s manager that you’d never amount to anything musically.

That was the bottom and a terrible day, because it was also the day John Lennon died. But I saw something in myself that day. Up to that point, all I was trying to do through the band was get a record deal. I realized it shouldn’t just be about that. I thought we’ve got to put our ideals across and give something tangible to our audience through our music. Something where they can say, “Wow! Those guys mean it. Let’s apply that to our lives as well.”

I remember walking away from that moment with no anger or bitterness and later telling him, “You’re wrong. I’ll prove you wrong.” It was a wakeup call and a turning point that shocked me into real action instead of just going for a ride.