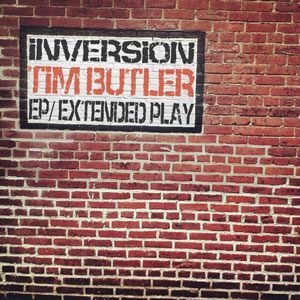 Inversion, as defined by Merriam-Webster is a change in the position, order, or relationship of things so that they are the opposite of what they had been. For Tim Butler, it’s a phenomenon and EP project that’s taken three three years to arrive.

Finding himself at a crossroads of his musical career, the Glenside singer/songwriter took a hiatus from regular album releases and shows. Choosing instead to lay low until his musical energy was re-fueled. Thankfully, Butler’s creative juices are once again firing on all cylinders. His new EP is a blend of catchy melodic pop combined with tasty guitar work and inspired topics.

Whether he’s singing about love, moving forward or just being happy, rest assured Butler’s songs speak to the positive side in all of us. And in times like these, it’s something we all need to be reminded of.

I spoke with Butler about Inversion as well as his return to one his favorite venues.

It’s been three years since we heard new music from Tim Butler. What spawned the Inversion project?

As many of my fans know, I took some much needed downtime. For the first time in my music career I was becoming a little burned out from regular gigging. I was in a sort-of creative slump, which was something I was not used to at all. Although I did do some random shows during that period, I decided to lay low for the most part. Eventually, it got to the point to where I really started to miss making music. I had a few songs I had never recorded and decided to sit down and see what would happen. I ended up writing a few new songs too.

Why the title – “Inversion”?

I was really indifferent as to what to name this project. In the past, I’ve always just named projects after a song if I wasn’t inspired otherwise. This one was almost called “Sweet Is”, which isn’t too bad. “Inversion” though is simply another way of describing my return to songwriting and sharing my music.

How did you approach writing for this album?

Although my approach was not all that different from what I’ve done in the past, I just really let these songs go and let whatever happened happen. I wanted the sound to come together a little more organically and didn’t try to over think it. I carried that same process over to the band and then into the studio. I like the outcome, a lot!

It’s a song about how I processed this particular project and about getting out of a creative slump. It’s more of a reflective song for me.

That was a song that I wrote a few years back. It was written about a very special relationship and appreciating the simple, yet huge things that make it special. I performed the song solo for a long time but never recorded it. I loved hearing it come together.

My favorite of the new bunch. It encompasses everything I love about pop tunes and what I have become known for: melodic hooks, great production value, harmonies and a song that just makes you smile. The main jist behind this tune comes from my writing philosophy. It’s about just letting things be the way they are. Express the music as you want to and be happy with it.

Where do you find the inspiration for your songs and lyrics?

Inspiration usually comes from experiences for me. Sometimes it can be about who I am listening to at the time. I tend to be a “music first” kind of writer and specifically choruses. I’m more attentive to sound and that’s what inspires lyrics.

Who are some of your musical influences?

That’s the single toughest question I get asked. When I first started writing songs I was mainly influenced by three artists/bands: Crowded House, Michael Penn and Matthew Sweet. Michael Penn is just flat out an amazing songwriter on all fronts. He’s respected in many circles but highly underrated. Mathew Sweet brought melodic sound to my head. Catchy rock and roll BUT with a guitar driven push that I’ve always loved! Crowded House and the Finn brothers….say no more. For me, their library of tunes embraces everything I love. I’m also a huge fan of bands like Velvet Crush, The Foo Fighters and Superdrag. Basically, anything that’s melodic pop.

Do you have any shows lined up?

Right now, all of the focus will be on May 3rd at Puck, which will also be a band reunion. I’m really looking forward to getting back on stage and sharing the EP. Following that, I’ll start game planning for more shows. EP support is now the new priority.

Puck has always been a favorite of mine and the band as well. I love the stage and the in-house production. It’s a cool room that lends itself well for music listening. I’ve also found Doylestown to be an attractive place for my fan base. It’s all about location.

Tim Butler Will perform at PUCK on Saturday, May 3rd.
For Details and Directions: Click Here

Keep Up With Tim Butler by Clicking Here

Guitarist Tim Butler’s love of music goes back much further than the twenty years he’s been performing in the Philadelphia area. From his early years singing in boys choirs, to his stints in high school musicals and teaching himself to play the instrument he loves, Butler is the pure definition of singer songwriter.

His catchy, hook ridden original songs have received lavish praise and his tasteful renditions of songs by such artists as Crowded House and Mister Mister have been pleasing audiences for more than two decades. But the thing that really makes Butler unique is that he’s just as comfortable performing solo as he is with a full-band; both of which being a must see.

Butler took a bit of a hiatus in 2013, but will return to his native Lehigh Valley for a show at the Nazareth Center for the Arts on Saturday, January 18th. In addition, he’s also been working on a CD of brand new material that’s expected to be released in February. I spoke with him about both and more in this exclusive interview.

Tell me a little about your upcoming show.

The show will feature 2 performers. Opening will be a musician by the name of “Not for Coltrane.” He’s local to the Lehigh Valley and has a very cool alt-folk-rock type of sound. Due to some of the constraints of the venue, I will not be playing full-band and instead will be doing a duo performance with my long time bass player, Rick Delana.

How would you describe the sound of your music?

I have really been described as many things: rock, pop, alt folk, alt country, folk rock, it goes on an on. Hearing that entertains me, but it also makes me realize that listeners can hear a lot of different things. I will tell you that I cut my teeth on pop and rock. Structurally, most of my songs are pop tunes. I love hooks and big choruses! But there is definitely a “rock” sound to many of my tunes, especially when I’m playing with the full band.

What are your thoughts on performing cover material?

I’m primarily an artist that does original music but I do enjoy sprinkling in some covers. Sometimes I’ll play something because someone asks me to, but 90% of the time the covers that I do really mean something to me or sometimes its just because I like the song or band.

Can you give us an update on your new CD?

It’s likely the new recording will be ready to drop by early to mid February. Most of the tracking is completed. There’s still some lead guitar work that needs to be done and then we are on to mixing and engineering.

Is there a particular song from the new CD that excites you?

One of my faves from the new CD is a song called “We’ll Be Happy.” It comes from a place that is my bread and butter: pop, with lush harmonies. It may sound a little “Beach Boys”, but I’m ok with that. I went in that direction with the instrumentation and harmonies. I didn’t fight it at all. In fact, with this CD I decided at the outset to just let the songs go wherever they wanted to go. Every song on this release I just let happen.

I am primarily a music first kind of guy. Sometimes a song will start with just a riff or a chorus structure or sometimes it might just be a “sound.” From there, I usually work through melody lines, etc. By that time, I’ve typically created a theme in my head and create lyrics based on that. It’s really worked well for me.

When did you first get bitten by the music bug?

I started singing at a very young age. I was in a touring boys choir starting in 5th grade and sang in choirs and in stage performances for a very long time. I took piano lessons for a short while and didn’t pick up a guitar until my senior year of college.

Tell me a little about your music experience in high school.

I have a lot of very fond memories of high school. It was there that I decided that I wanted to stick with music. It solidified that I would have music in my life in some organized fashion even if I didn’t major in it in college.

Coming into EAHS [Easton Area High School], I was actually all “choired out” and avoided singing all together. I remember people were always trying to get me involved, but I just wasn’t into it. Then one day, Ed Milisits [EAHS choir director] tracked me down and “drafted” me. I remember he was very persuasive about it and I ended up joining the Concert Choir and also being in a few school musicals. Those years were a big part of my life.

What are you most looking forward to in 2014?

I have been doing this pretty much non-stop since 1994 and last year decided to take a bit of a break (although I did perform a few random shows and at fundraising events). I discovered that I really missed making music, so getting back in the studio was GREAT!  I’m very excited about 2014. Although I won’t be setting out onto a full-fledged tour, I will be doing more shows that give me the opportunity to share some music. For me, I’m blown away with everything I’ve been blessed with over the years and am just so thankful! Musically, I hope to continue to do something that I really love to do. If someone likes it, loves it or it can mean something to them, then that’s a huge win for me.

For more on Tim Butler, check out his ReverbNation site by Clicking Here!