Who would have thought how much could change in a quarter century? To think that at the time I received my high school diploma in June of 1987 the world was a much different place for me.

I’ll be honest, when this picture was taken I figured it would probably be about a year before I’d be on the cover of “Rolling Stone” magazine talking about my band’s debut album and world tour with Def Leppard. I had high hopes and wasn’t going to let anything stand in my way.

Twenty-five years ago the only thing I wanted to do was rock. I’m serious. I mean that’s ALL I wanted to do. I really didn’t want to go to college and I sure as hell had no interest in doing anything that resembled actual work.

On the contrary, my days were usually spent sleeping til around noon, practicing my guitar and mooching money off of my parents and grandmother for such things as gas for my car and coffee and cheese fries at Perkins. After all, a man’s gotta eat!

“Borrowing” money from them soon began to get old and my options were starting to run out. I was worried that I might be completely broke before fame came knocking at the door. What to do?

It wasn’t until I discovered that student loans were readily available that I began to have second thoughts about going to college. I mean, who wouldn’t want some free money? Money you wouldn’t have to pay back until after you graduated college!! Hell, that could take YEARS!! I quickly signed any promissory type note I could find and still recall running down to the bursar’s office every day at Penn State Allentown to see if there was a check for me.

And what did I do with this windfall of cash – the money I was supposed to use for tuition and school supplies? I bought a guitar and wound up dropping out.

This cycle was repeated over the next few years as I applied to community college and eventually West Chester University. I discovered that as long as I was enrolled in school I was “off the hook” for paying back the money. At least in the short-term.

It wasn’t until I woke up one morning, dug into my pockets and realized I had $1.37 to my name that I had an epiphany. I couldn’t keep doing what I was doing. I needed to contribute.

Here I was, twenty years old with $1.37 to my name and nothing more. The friends I had graduated with were now halfway done with college and were well on their way to bigger and better things. It was my wake up call. Rock and Roll would have to wait. 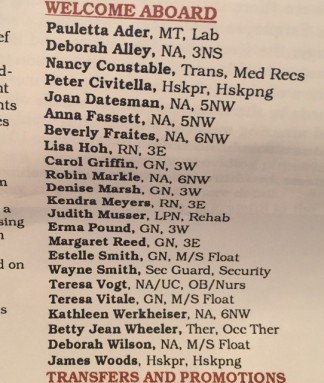 I started working full time on the 4-12:30 am shift as the head garbage man at Easton Hospital. That’s right, I literally started at the bottom. Any gum wrapper, cigarette butt or operating room bio hazardous waste was handled by me. I hated it with a passion but something inside of me kept me going. I knew better days were ahead.

A year later a position opened up in the pharmacy. It was a 2:30-11pm shift but was the perfect chance for me to get out of garbage. I worked that position for eight years.

Eventually, I made the decision to go back to school and get my degree in computers, married my high school sweetheart, bought a home and have a beautiful daughter. Although it might have taken me fifteen years, I even paid back all of my student loans.

As I look back on this picture a quarter century after it was taken I see someone who had big dreams. And someone who twenty-five years later, in some round about way has achieved them.

2 thoughts on “The Graduate: 25 Years Later”