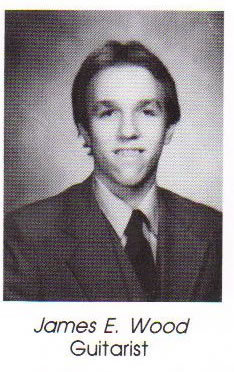 I really am grateful that I took the time to semi-regularly write a journal during my high school days. It gives me the opportunity now to look back and see where I was and just how far I’ve come. Back then, the future was bright and there were no limitations. Oh sure, there are definitely some things I lament doing and not doing, but all things considered, I wouldn’t change a thing. The good, the bad, the mistakes I’ve made – they’ve all made me into the person I am today.

This was my situation 25 year ago this very day: I had just graduated from high school nine months ago and was already a college drop out, living at home and without a job. Most of my time was spent either practicing my guitar, driving a beat up 1974 Ford Torino, bumming money off of my mom and grandmother and doing anything I could do to make it to the big time.

One of the biggest regrets I had musically in high school was not being able to participate in my senior year Battle of The Bands competition. It was an annual event held in the high school gym every spring, and gave students the opportunity to showcase their musical talent in front of the greatest audience of all: their peers. Even if you didn’t win, just being in the battle was a right of passage for future rock-star musicians.

At the time, I had no band and thus couldn’t participate. But for some reason that now escapes me, (I blame it on the ten Zimas I drank on my wedding night), I was somehow able to submit an entry for the competition the following year, 1988. By this point, I had already formed my first three-piece band and had begun the process of taking over the world with our brand of face melting metal. Needless to say, I was elated to have this opportunity (albeit a year later) and wanted to really shine.

Reading this journal entry now, a quarter century later is surreal. I was (still am) a huge Ozzy/Randy Rhoads fan and at the time must have played the song ‘Crazy Train’ a million times. I was also hugely into Poison and AC/DC, so those songs also had to be included on the live demo tape we recorded for the judging panel to see if we had what it took to compete. We never did get a call back about being in the battle that year, and I never followed up on it. By that time, my band had already started playing real gigs and the battle (much like the reason we could compete in it in the first place) soon became a distant memory.

Even better than the entry I wrote about the battle of the bands was the question I posed to myself afterwards. I asked myself what it was that was making me so happy in life. My answer is pretty cool.

3/30: I attended a meeting of the Battle of The Bands. It will be quite a competition. I think we’ll get in. They only take eight bands and I’m confident that ‘Silent Rage’ will be one of them. We have a demo and I think it is really good. My situation has really changed since last year at this time. Back then, I was the high school student who dreamed of being in the battle and now I’m actually living the thing I should’ve done last year. Even if we’re turned down, at least we tried.

All I know is, the other seven bands they choose better be extremely good. We played and recorded Crazy Train three times on my cassette player and kept the best version; the one that’s there now. The first attempt had no bass, then too much bass and on this one, it’s an even balance. I swear, some parts of that song make me think Randy Rhoads was controlling me. Even the Poison shit sounds professional. Where it goes “I’ve gotta have you, oh yes I do!” I swear, that little lead I play is C. C. Deville. My original is quite good too and Shook Me by AC/DC is kick ass.

Why are you so happy lately?

The band is the reason. For once in my life, I’m doing something that I really want to do. I’m in my career. No one understands why I talk about it so much. They think it’s probably a phase. It’s not.

I didn’t want to play guitar to be a hobby. I wanna be the best. I want to someday look in a guitar magazine and see my picture as an artist and be recognized as a guitarist and songwriter. Sure, in the beginning everyone gets into it for other reasons; like girls, money and fast cars. I originally thought girls were the reason I got into it too. But deep down, I had this weird feeling and as each day passed, I fell more in love with music than ever before.

Before my junior year in high school was over, I was taking Music Theory. But even that wasn’t enough. In my senior year, I took Music Appreciation, Choir and Theory II. During that time I had guitar lessons and sometimes practiced for five hours a day. Now, the girls don’t matter. As long as I can live normally, I don’t care about the money or the fast cars either. I’ll drive a Torino until I’m 90. All I wanna do is play and make money that way. I want to write songs and have money to go out to dinner. After three long years it’s starting to happen.

I’m so happy about my life at this point, I can’t help but talk about it. Someday, my hope is that everyone else will understand it too.