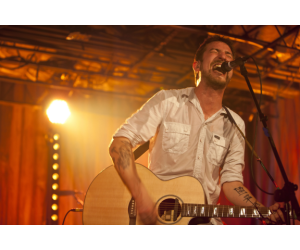 Guitarist Frank Turner’s preferred method of swaying people to his cause is just getting in front of them and playing. With his upcoming Guitar Center Sessions, he gets the opportunity to showcase for the world. Filmed during his hectic SXSW schedule, the show not only includes performances by Turner and his band but also an in depth interview Turner as well.

Since leaving the band Million Dead and going solo in 2005, Turner has released four acclaimed albums and played more than 1,400 live shows. His recently released fifth album, Tape Deck Heart is one of emotional revelation and change. It’s the kind of album Turner says he’s always wanted to make.

I spoke with Turner about the Guitar Center Sessions as well as his new album and one of his most memorable shows.

GUITAR WORLD: What can you tell me about your Guitar Center Sessions appearance?

It was filmed in the middle of SXSW and the schedule I was on was hectic. There was one day where we played a show in Austin in the afternoon, and then we flew to Denver for a breakfast show and then flew back to Austin for two more gigs. Throughout my career, the way things have gone for me is getting out there and playing, and that’s what we’re doing with this Sessions performance. Getting in front of people so anyone around the world can watch it. There’s also an in-depth interview session we also did which was great.

You can read the rest of my Guitar World interview with Frank Turner by
Clicking Here.