I’ve written over 360 articles since starting my blog over two years ago. During this time, I’ve had the pleasure of interviewing many artists, directors and musicians about their current and upcoming projects. My blog has also been a haven for my own musings and ramblings on everything from high school memories to home movies.

But of all the things I rant about and all the people I’ve interviewed, the articles that I’m most proud of are the ones where I get a chance to speak with someone who has really made a difference in this world. And such is the case with this one: my interview with my classmate, co-author and friend, Michele Quinn.

When disaster strikes, we as a society are inclined to come together and do whatever we can to lend support. Usually, we’ll donate things like money, blood and articles of clothing to various charities, but unfortunately (for many reasons) often have to leave it to others to provide the one thing we ourselves are unable to: our time.

On the afternoon of May 20th, 2013 an EF5 tornado, with peak winds estimated at 210 miles per hour, struck the town of Moore, Oklahoma; killing 24 people and injuring 377 others. The tornado was estimated to be 1.3 miles wide at its peak and stayed on the ground for 39 minutes over a 17-mile path, crossing through a heavily populated section of Moore.

After witnessing the horrific events that were unfolding, Michele (who had always donated and helped raise money at home) decided to physically get involved and take part in the relief effort. Together with a friend and her son, they drove over 1,000 miles from their home in Ohio to the ravaged Oklahoma town to assist total strangers any way that they could.

What follows is her story.

As I sit here now and contemplate Michele’s actions, I am reminded of how one person really can make a difference. When I read about her experiences and see the pictures she took, I am quickly overcome with emotion. She’s set an inspirational example the rest of us need to follow, and for that I am so proud of her.

When you first witnessed what was going on with the storms in Moore, what was your initial reaction?

My initial reaction was fear and sorrow; so much that I spent a great deal of the evening crying. I prayed that people would be safe; especially the children and teachers at the two elementary schools that were leveled by the tornado. 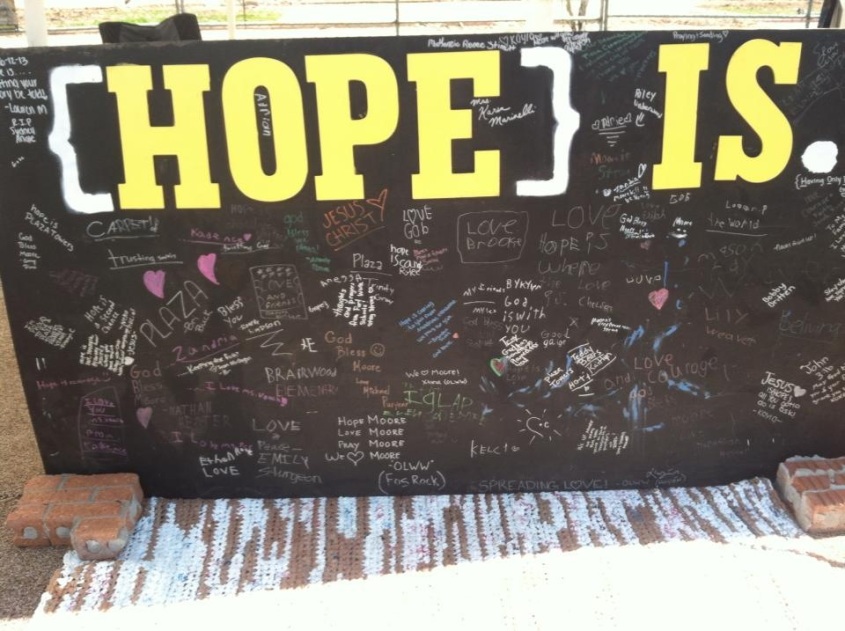 Considering that you live 1,000 miles away, what prompted you to decide take part in the relief effort?

I’ve always felt the desire to assist in disaster relief every time a tragic event like this occurs. Whether it was the tornado that hit northern Ohio three years ago, the tragedy in Joplin, MO, or as recently as Hurricane Sandy last year. While I would always make it a point to donate to the American Red Cross and collect donations to drop off at local collection sites, it never felt like I was doing enough.

So as my husband, Patrick and I were lying in bed watching the horror unfolding on the news, I made the comment that I wanted to go help. Patrick’s reply was ”Then why don’t you?” It took all of two seconds for me to post on Facebook that I needed a travel partner to go with me, so who was game? 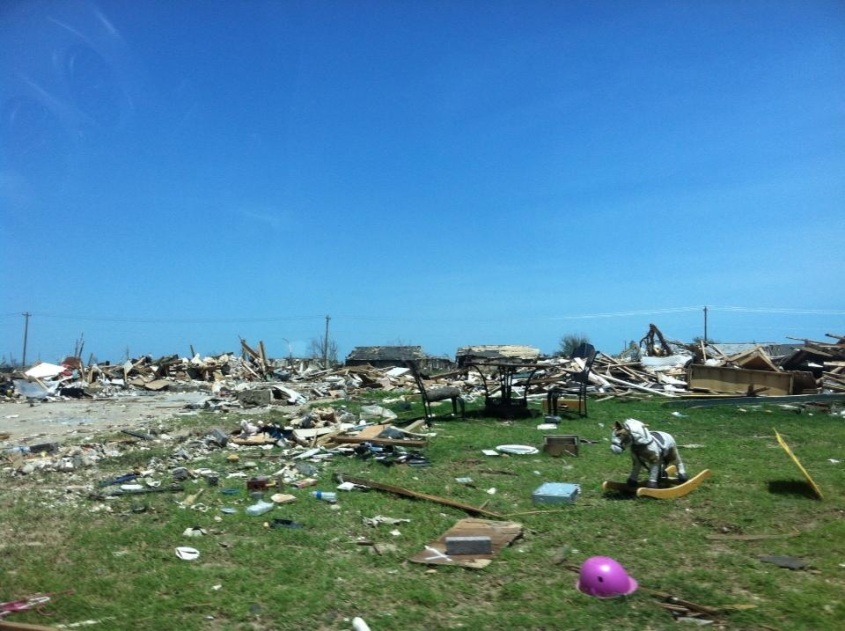 Many folks said that they wished they could do it, but understandably could not. That was me many times in the past. But I had finally completed my stint three days earlier as a full-time student as well as doing an internship and was in a position to go give whatever I could offer, despite the fact that I was scared to death of what I might see, hear and feel. One of my good friends and her teenage son were able to go with me, which turned out to be a blessing.

Knowing full-well that I am not a first-responder, I had no intention of hauling out there immediately since I’d only be in the way. And as anyone who knows me will tell you, I would need to plan the bejeebers out of a trip like this. Some might also think that I was doing this just for attention or a “pat on the back”, but that was never the case. Several people even tried to discourage me from going.

When you arrived in Moore, what was your first impression of what happened there?

It was strange on that first day. We arrived three weeks after the tornado struck and had to stay in the Tulsa area, as there were no hotels were available in Oklahoma City. We also had to drive two hours back and forth each day to Moore. All we noticed along the way were some lopsided light posts and a few odd items lying on the side of the highway outside of OKC.

I even remember that we were all marveling at how much clean up must have already been done before we arrived. Even when we entered the school parking lot where the church that we were working through was stationed [Everyday Church], we still saw nothing amiss. It wasn’t until we were sent out to canvas neighborhoods to find anyone who needed supplies that the impact of what happened hit us. I know this may sound cliché, but it was literally like entering a war zone. 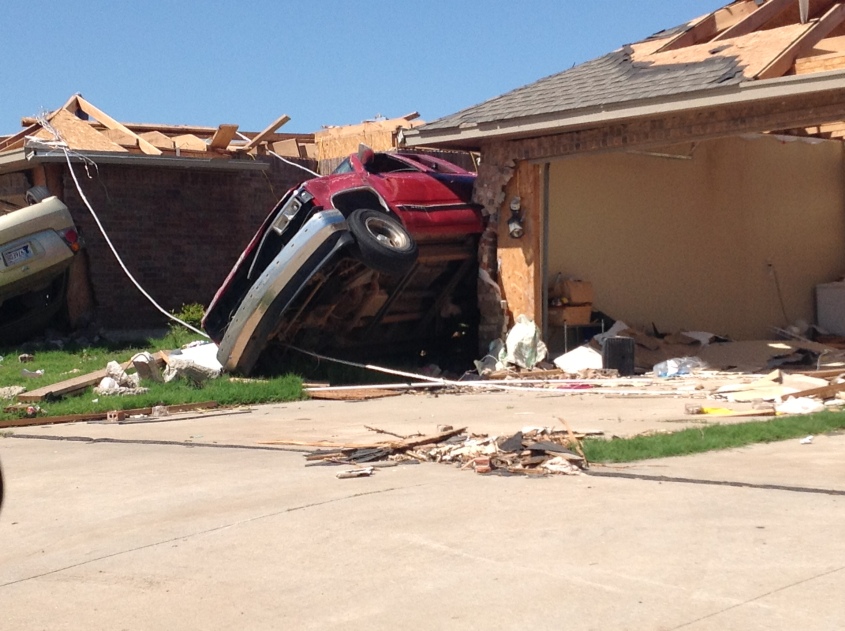 What was your day-to-day activity?

Our daily job included unloading a supply trailer that was set up in the school parking lot so people could come by and take whatever they needed; toiletries, diapers, dog food, baby food, etc. We also organized the trailer and loaded it back up at the end of each day. We were then sent out to people’s homes to assist in debris cleanup, which was often brutal given the 95 degree heat.

Tell me about some of the people you met there.

We met an amazing number of people. The two pastors we met from Everyday Church were staying in temporary housing. There’s is a brand new church that wasn’t supposed to open until August, and hence the reason they were in a school parking lot.

We helped a woman named Karen move out of her rental apartment because she was given literally 4 days notice that she had to be out of her place. The poor girl was at her wit’s end; trying to make it happen with no truck, no people to help her and no storage unit to put her furniture in while she temporarily stayed with her mother. Had she not made the connection with Everyday Church, she would have lost nearly everything she owned.

We also met an older couple who have withstood many tornadoes over the years. They were actually able to get their property cleaned up after the storms on May 20th, but the next round of tornadoes the following week deposited debris all over it again. They opened their home to us and even showed us their storm shelter, which my friend and her son explored.

Overall, we couldn’t have met kinder, more appreciative folks. Everywhere we looked, there were people helping others out. From the Red Cross canvasing farm lands with a meal truck to feed anyone who needed it, to one young man who miraculously showed up with a truck to help us move Karen, even though he had to go to court as a witness for something.

What did you take away from your experience?

What struck me the most about the experience is the resilience of the Okies; the love people have for complete strangers and that things are really just that…’things’.

It’s the lives in this world that matter more than anything else.

Some of the people we met initially referred to having been abandoned by God. But after surviving the devastation, and with the arrival of a few strangers into their lives, instead of understandably feeling bitter and angry, they’ve come to believe that God really is in everyone, if they only choose to see.

Please visit this website to learn more on how you can help.