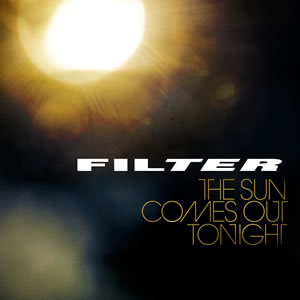 Shoving a fist in the face of tradition has been Filter’s method of operation since the release of their debut album, “Short Bus” in 1995. Since then, the band has continued to raise the bar with it’s unique blend of modern industrial rock, including 1999’s “Title of Record” which featured the hit “Welcome To The Fold” along with  the crossover smash “Take A Picture,” a song which charted on both the Billboard rock and dance charts.

The new millennium saw the release of three more Filter albums: 2002′s “The Amalgamut,” 2008′s “Anthems For The Damned” and 2010′s “The Trouble with Angels”, all while touring the world and amassing a multimillion member international fan base. Most recently, Filter has contributed songs to film soundtracks, including a cover of  The Turtle’s song, “Happy Together” which was featured in the trailer of the film “The Great Gatsby” and  has sold more than 85,000 copies.

Continuing it’s brand of fist to face music is the band’s insanely good sixth studio album, “The Sun Comes Out Tonight”. Recorded at Blue Room Studios in Los Angeles with producer Bob Marlette, the album was written and recorded by leader and vocalist Richard Patrick and bolstered by his new writing partner, guitarist Jonathan Radtke.

The album’s title got its inspiration from the band’s song “Drug Boy,” written about a group of outsiders Patrick used to hang with in between Nine Inch Nails tours (Patrick was a touring guitarist for Trent Reznor’s NIN before leaving the group in 1993 to form Filter).

With a new major label behind them in Wind-Up Records, Patrick and Radtke; along with bassist Phil Buckman and drummer Jeff Friedl are ready to return Filter to the spotlight. I caught up with Patrick recently as the band began a tour with Stone Temple Pilots in Bethlehem PA.

What is the meaning behind the album title: The Sun Comes Out Tonight?

Back in Cleveland, I would have to take drugs for the sun to come out at night. I would climb underneath the bridges and ride them as lake liners, or would come underneath them. We would live in the shadows because LSD was too strong for the normality of a club or bar. Inspirations from that period in my life will always be there for me even after the fact that I’ve been sober for more than ten years.

How would you describe the sound of the new album?

What was the writing process like for this album?

It was to make sure it blows our own minds. We would never release anything that we didn’t love. Jonny, Bob and I would sit with acoustics and make the chords and melody. Then we would take the computer and finish it.

Let’s discuss a few songs from the new album: “We Hate it When You Get What You Want”.

People f$ck each other over for profit.  People have no shame when it comes to money. Capitalism is the law of the jungle and humanity has no place for it.  Humanity is about each other.

Everybody is speaking and no one’s listening.  We need to learn to listen as a species.

No one wants to die alone. It’s for those people on death row that were innocent, and so on.

What was the recording process like? Any differences from previous Filter albums?

It was easier! I’m getting better all the time!

What was it like working with producer Bob Marlette?

Bob Marlette is great!  Sometimes I think you should get a second end engineer to make things way faster because he’s slow!! [laughs]

This is your first album on Wind-Up records. How has the experience been?

They are absolutely amazing. They have money, they have resources and they have great people and great artists. It’s great to be back on major.

What do you find is the most challenging thing about touring?

The only thing that sucks about touring is not being home with my family.  I have two small children and a beautiful wife.

What’s your view of the music industry today?

It really hasn’t changed beyond the fact that you have to make great music and hope it catches on.