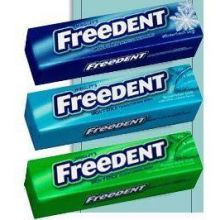 I stood fourth in line at the Quik Mart this morning with nothing but my customary 20 oz coffee in hand. A ritual that I’ve been following most mornings since becoming a working member of society.

While my thoughts were fixated on the day ahead and the consumption of hot, golden deliciousness I happened to notice the plethora of items that sat neatly on the store counter available for quick purchase.

There were small, red plastic bottles filled with a fluid that promised an extra boost of energy in the event you found yourself dragging during the middle of the work day. Bags of Swedish Fish beckoned to my inner child with fairy tale urges of sugar rush. Truthfully, had it not been for the fact that it was 5:30 in the morning, a package or three would have left the store with me and my coffee.

As I continued to stand behind customers purchasing everything from gasoline to cigarettes, I discovered that one of the patrons in front of me was also purchasing a pack of Freedent chewing gum along with their Marlboros. 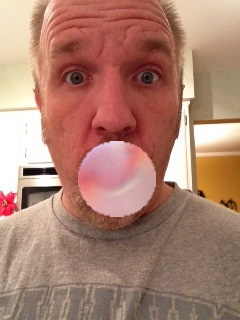 Now there is one of life’s greatest mysteries. A 5,000+ year old product that has always confused me. For no matter how often I chew it or how many bubbles I blow, inevitably two questions always come to mind whenever I consider gum of any sort:

First of all, why is it that we as a society can invent things like the Internet or build a hover craft the size of a pea and land it exactly where want it to on the surface of Mars, but still can’t figure out how to make a stick of gum’s flavor last more than 15 seconds?

Second, and even more importantly: Has mankind ever really considered the true power of gum?

Gum itself has been taboo for years. Back in my school days it was contraband and one of the quickest ways to earn a visit to the principal’s office. It was off-limits on school grounds, and only the fool would dare risk life and limb by sitting in an Earth Science class chewing like a cow on Hubba Bubba.

Of course, that didn’t deter us.

In between classes, when no one with a teaching degree was looking, there was plenty of gum to be found. Sometimes it was bartered in bathroom stalls or doled out behind locker doors. I confess, I was one of the offenders and did partake in the reverie. And yes, there were many times I raided my mother’s purse before school just to bring the goodness of spearmint to campus.

Gum’s power was just to big for me to ignore.

For aside from the short-lived flavorful chew just before it became a bland piece of rubber, gum synthetically gave me something more. Why just having gum in my possession gave me popularity, courage and the confidence to do things I’d normally never do.

Case in point: The only time I ever had the nerve to talk to any of the girls in school was if there was a pack of gum in my pocket. And any attempt to open the line of communication without it was only met with sweaty palms and heart palpitations.

I was never one of those guys who could ask a cute girl what she got for question three on a homework assignment, much less invite her to a dance. But put a pack of Fruit Stripe in my Garanimals and I instantly became a teenage Casanova. Because as long as I had a five-pack of gum, I knew that I could fearlessly ask her if she wanted a piece, and nine times out of ten knew that she was going to answer in the affirmative.

Which leads me to this conclusion. Stronger than any threat of a nuclear mushroom cloud or zombie apocalypse, I really believe gum might be the one thing that could bring about world peace.

What if John F. Kennedy had offered Nikita Khrushchev a stick of Bubblicious fifty years ago? I’m thinking Kroosh (I would’ve called him that) would gladly have accepted and instead of having a Cuban Missile Crisis there might have had a bubble blowing contest.

What if Ronald Reagan had offered Mikhail Gorbachev some Freedent at one of their many summits? Not only would it have not stuck to their dental work, but I also believe it might have ended the Cold War sooner. What if all the differences amongst all the nations could simply be resolved over a stick of gum?

The truth is, we may have only just begun to scratch the surface of what gum can do for the good of mankind. But whether it encourages young love in school classrooms or summit meetings between rival nations, one thing’s for sure:

The simple pack of gum has five chances to turn any enemy into a friend.

3 thoughts on “The Power Of Gum”