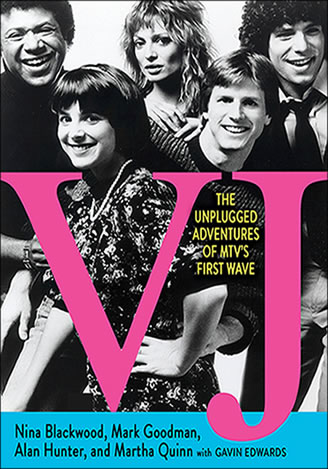 The music business was in the toilet when a fledgling channel named MTV hit the airwaves to start the engine again.

Throughout the decade, MTV became one of the biggest things on the planet and revolutionized the music industry with a new medium — music videos.

Viewers would regularly host their own MTV parties, tune in for Friday Night video fights and experience unprecedented musical events such as Live Aid. The MTV phenomenon was so big that Dire Straits guitarist Mark Knopfler referenced the channel, incorporating its “I want my MTV” slogan in the band’s massive 1985 hit, “Money For Nothing.”

Four of the original MTV VJ’s — Alan Hunter, Nina Blackwood, Martha Quinn and Mark Goodman — have written a book about their experiences, VJ: The Unplugged Adventures of MTV’s First Wave.

The book, which is co-written by Gavin Edwards, is a narrative-driven oral history of MTV, complete with behind-the-scenes tales and anecdotes as told through the VJs’ own voices (NOTE: JJ Jackson, the fifth original VJ, died in 2004).

From stories on how each VJ landed their job, the channel’s historic launch, the changing dynamic and their eventual departure, the book details the triumphs, pitfalls and everything in between. Today, in addition to acting and producing their own syndicated radio shows and films, the four original VJs can regularly be found on Sirius’ ’80s on 8.

I recently spoke to Hunter and Blackwood about the book and their days at MTV. They also discussed their favorite guitarists and other projects they’re working on.