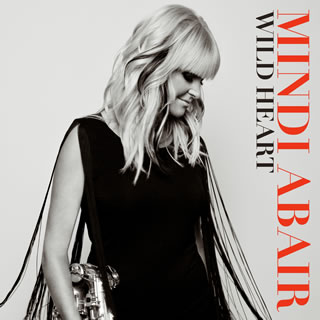 Saxophonist Mindi Abair is one of the most creative artists in music today. Already known for her acclaimed jazz prowess, Abair has been the featured sax player on American Idol for two seasons, toured with the likes of Duran Duran and Aerosmith and even did a stint with the Boss himself, Bruce Springsteen. But on May 27th, Abair takes reckless abandon to a whole new level with her new album, Wild Heart.

For this project, Abair brings along some musical heavy weights that include Joe Perry (Aerosmith), Jim Peterik (Ides of March/Survivor), Waddy Wachtel, Max Weinberg and even an emotional duet with the legendary Gregg Allman. By capturing the raw emotion, power and synergy Abair delivers an album unlike any she’s ever done. Wild Heart is definitely not your father’s jazz record, nor one that you sit down with over a glass of wine. Rather, it’s an album to rock out to and savor.

As an added treat, Abair has partnered with Pledge Music to give fans the opportunity to interactively experience Wild Heart. The campaign offers exclusive packages ranging from dinner with Abair and her band to shout-outs at concerts, signed CDs and much more.

I had the pleasure of speaking with Abair about her amazing new album and more in this exclusive interview.

What inspired the Wild Heart project?

Over the last few years, I found myself moonlighting; doing a lot of rock and roll, blues and organic music. I remember touring with Aerosmith and seeing the sheer abandon they brought to the stage night after night. Then I went on the road with Max Weinberg and played with [Bruce] Springsteen for a night. I was inspired and didn’t want it to just be something that I experienced. I wanted to bring some of that energy into my own project. This record really captures the mojo I had been playing with for so long, and it was so much fun bringing in people I love and respect to help me create this sound.

Let’s discuss a few of the songs from the album:

You can’t just write songs about the bad experiences in your life. Sometimes, you’ve got to write about being on a winning streak. That song came about because I changed a few things in my life and things started happening. I started doing American Idol, then Steven Tyler came to me and asked me to go on tour with Aerosmith. They were always a huge influence on me. I was in this life event phase where things were just going my way and I felt like writing a song about it. Whatever it is, right now I can’t lose.

Amazing Game / Train.  What’s it like to write a song with Jim Peterik?

I first met Jim on a jazz cruise when he was there to promote his Lifeforce CD. We became great friends and have written a lot of songs together. I love writing with him. Words and melodies just flow out of him. He lives, breathes and cares so much about every note, word and chord. With “Train” we wanted to write something that had energy and really conveyed that change of life attitude. You know you want to change, yet you’re stuck in that rut. But there’s a train coming, and you’re going to jump on and leave it all behind. I always tell Jim that he brings the “eye of the tiger” to his writing, and the two songs we wrote for this album (Amazing Game and Train) both have the eye of the tiger in them. That’s the force of nature that Jim Peterik is.

I wrote the song with Matthew Hager who produced my first four cds. I always thought it was a great song but I wanted more power from it. Then I remember sitting in the studio one day and suddenly pictured Joe Perry with his shirt half-ripped open, walking down the runway with his guitar in front of 50,000 people and killing it on guitar. Then I said, “Wait! I KNOW Joe Perry! This could actually happen!” [laughs]. So I made a phone call and we were literally in the studio within a week. He brings so much power and testosterone to a track. It was amazing to sit there and play off him. He pushes you to better yourself and that’s exactly what he did on that track.

The Shakedown (with Waddy Wachtel)

I first started playing with Waddy back in 1995 when he was the music director for Adam Sandler’s band. Whenever I’m on stage with him, that whole atmosphere is my zen. When he said that he wanted to be a part of this project it made me so happy. So we went into his studio and wrote that song. Another cool thing about the song is that my dad actually plays B3 on the track as well.

How did Max Weinberg get involved on the track?

I toured with Max shortly after Clarence [Clemons] died. He needed a sax player and I went in and the two of us hit it off and ended up going out on the road for a few weeks. We became really good friends and I asked him to be a part of the project. Working things out with our tour schedules was tough, but we planned it out for when we were both in New York doing separate gigs. I booked a studio, we each came in before our sound checks and made it happen.

Just Say When (with Gregg Allman)

“Just Say When” is not even a song. It’s Gregg. When he plays he always reaches out and touches the depths of your soul. I spent three days at his house and we wrote that song together. It was crazy to be there with him and live his existence for a few days and just be creative. It was a master class in musicality. It’s real and very representative of both of us.

What made you decide to do a Pledge Music campaign for the album?

I really love what I saw people doing with it. You’re capable of giving so much more than just a CD and letting fans become more involved in the project. I’ve got really incredible fans, so offering up a few things is a way for me to be closer to them and also gives a window into the soul of this record.

What first attracted you to the saxophone?

My dad played sax and I grew up on the road with his band. He always looked like he was having a good time whenever he played. In school band, I remember they had put some instruments out on the floor and said “choose”. So I thought back to him and chose the sax. It was also a point in music history when there were a lot of great players in pop music: Maceo Parker, Clarence Clemons, David Sanborn and others. Sax was a viable instrument even going back to the inception of rock and roll. There was a time when you couldn’t have a band without a guitar and a sax. With this album, I wanted to make a saxophone record that hearkens back to a time when sax was the coolest instrument on the planet.

Over the course of your career has there been one moment that stands out to you as most memorable?

It’s been an awesome journey. Getting to play with Bruce [Springsteen] was pretty amazing. Going out on tour with Aerosmith was another huge highlight. To get to play and sing with them every night was a dream come true. But the real high for me is every night on stage with my band. I never take for granted the fact that I get to go out there and play music that I wrote and share it with people. To have this beautiful conversation from the stage is really special.