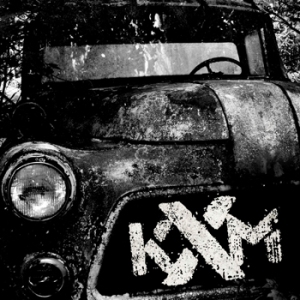 Taking its name from the combination of each member’s ‘day jobs’, KXM delivers a very deep, thought provoking debut. Songs like “Stars”, “Rescue Me” and “I’ll Be Ok” showcase elements from each’s respective bands, but the album is more than worthy to stand on its own. For a project that was neither pre-determined or planned, there’s a lot of unique interaction going on within the confines of KXM. It’s the trio’s strong musicianship and creative personalities that’s produced such an inspired, eclectic album.

In addition to KXM, guitarist George Lynch is working on several other projects, including a second Dokken-esque album with Jeff Pilson and Mick Brown and another super-group project with Michael Sweet (Stryper), James Lomenzo (Megadeth, White Lion) and Brian Tichy (S.U.N, Whitesnake). He’s also in the finishing stages of editing the “Shadow Nation” documentary. A film which illuminates the cost of destruction of the Native American community; to both the indigenous population as well as to their European conquerors.

I spoke with Lynch about KXM and also got an update on some of his other projects.

How did the KXM project come about?

Initially, the three of us were together at Ray’s house for a birthday party and wound up hanging out in the studio. That was when one of us brought up the idea of maybe throwing some stuff down. And it wasn’t like we all just went home the next day and didn’t think about it again. We kept following up and enthusiastically pursued it. The interesting thing is that we didn’t do any pre-production or write any songs going in. We just found this eight-day window of opportunity where we all trucked our gear up to this place in the mountains. We all hung out there and just started writing. It was that simple.

How would you describe the sound of this album?

One of the good things about this record is that it has a unique sound and formula to it, and that’s a product of the chemistry of the three of us. We had no preconceived idea of what we were going to write. Maybe I would come up was a riff that was a little “Lynch Mobby”. Then Ray would come in with a beat that was more syncopated, tribal and complex. Then dUg would come in and do things that were very unique and unexpected, which I loved.

What was the process for writing lyrics?

dUg wrote most of the lyrics. He and I got together for a few days at my studio. We really got to know each other and had a lot of long talks and I really enjoyed that. Some of the subject matter from our conversations late into the night translated into the lyrics. dUg’s lyrics are very personal, but those are the kind that really resonate with people more than anything else. You’re telling the story or describing the emotion. It’s direct, meaningful and cathartic.

What do you enjoy most about these collaborative projects?

I enjoy playing different kinds of music and building something up from nothing and turning it into something tangible. Also, most of the people I play with I love musically and as people. I like to say that my bands are like my second family. They’re people you care about, respect and create with. Even if it’s just a brief relationship on a project or for something that’s more longstanding.

This year marks the 30th anniversary of the Dokken Tooth and Nail album. What are your thoughts when you think back to those days?

That album was the turning point for Dokken. We had already done one record [Breaking The Chains] and had learned a lot, but were really determined to let people know that we mattered. Tooth and Nail was our real shot to prove that we had what it took to be where we thought we should be. We had a lot of energy and a lot to prove and were also starting to mature in our songwriting and tightening up as a band. All of that really peaked with the Under Lock And Key album, but I think what people love about Tooth and Nail is that it really captured the band when it was very hungry.

What’s the status of the second T&N album?

We’ve got six Dokken re-records finished but are going to change things up a bit. We’ve been talking about it and there are two things that could happen. First, we’ll change the name of the project and instead of using multiple singers, we’ll stick with two dedicated ones: [Jeff] Pilson and possibly Michael Sweet. Michael has such an angelic voice and a great sense of melody and hooks. It’s an obvious, wonderful replacement for the Dokken-esque sound that we’re known for. But then there’s a very slight chance that it could actually become a Dokken record, if a miracle happens and Don decides to play ball and play fair.

What can you tell me about your other collaboration with Michael Sweet, Brian Tichy and James Lomenzo?

It should be out sometime this Summer. Anyone who loves the older Dokken stuff and Michael Sweet is going to love this record. It sounds like the Dokken record we should have done after our last big one (Back For The Attack).

Do you have an update on the Shadow Nation Film and Shadow Train band project?

We’ve been working really hard on finishing up the editing. It’s a complicated process that takes a lot of man hours but we’re very close to finishing and then it will move on to post (production). After that, we’ll have the business of distributing it, getting it out to people and into film festivals. What I’m excited about too (beyond the film) is the record. Initially, we recorded a one CD record a few years ago that has a 70′s vibe to it. Then we went back in the studio a few more times and decided to go in a whole different direction. We went heavier and more in your face. Afterwards, we realized that we had really evolved as a band and with our writing and decided to put it out as a double CD. So, there will be a volume one and two with 19 songs that will be the companion to the film/DVD. It’s a very eclectic soundtrack.

What other projects are you working on?

Right at the moment, I’m working with Mandy Lion and an engineer and a programmer who came out of the Rob Zombie & Nine Inch Nails camps. We’ve finished seven songs a few weeks ago and have another big session where we’ll finish up the writing and recording of the basics for the rest of the record. I’m also working on another project called The Infidels with Sal and Pancho, the rhythm section from War. They’re monster funk/rock players who are just great. It’s a fun bunch of heavy, jammy funk songs with a Hendrix “Band Of Gypsys” kind of vibe.

Will Lynch Mob be touring this year?

We have some dates coming up in April and then we’ll be going to Europe this summer for some of the big festivals. We also have some plans for the States once we get back.

Has there been one moment over the course of your career that you consider most memorable?

There’s been a lot of beautiful moments and smaller ones that were just as gratifying. There was the Loud Park gig that Lynch Mob did last October in front of 25,000 people where we tore it up. That was beautiful. But then it could just be in a little club packed with 300 people. Where it’s all hot and sweaty and you just come out and blow the doors off. Or it could be as simple as a solo in the studio that you just nail. There are a lot of those kind of moments that stand out. There really isn’t just one.

For more on KXM, check out the band’s official site by Clicking Here