Even though it happened ten years ago, it still feels like it was yesterday.

I was standing alone in my upstairs bathroom. An introverted thirty-four year old man looking at himself in the mirror — and shaking like a leaf. It was 3 pm and soon I would have to muster up enough courage to drive over to South Bethlehem for sound check.

I suppose it’s best to give you a little bit of a back story before I continue on with this tale. So here goes..

From the first day I picked up my grandmother’s hand-held potato slicer, pretended it was a guitar and did my best Ace Frehley interpretation, it’s been my dream – shredding my guitar on a huge stage while staring out into a sea of people. And so began the days of callused fingers, long walks downtown to the music store for weekly lessons and countless hours spent practicing Mel Bay scales and Metal Method licks.

Unfortunately, my new found interest in music, repetitive practice and Les Paul guitars also brought along with it the constant torment and ridicule by my siblings and their friends. Many of them telling me (in not so many words) that what I was doing would never amount to anything. But rather than wallow in denial and self-pity, their words only served to reinforce my passion. So while other kids of the MTV generation played sports or hung out with friends after school playing Atari, I spent most of my afternoons trying to figure out how Eddie Van-Halen got his Kung-Fu. I was so sure of what the future held that I even wrote entries into my journal describing all of the things that were going to happen to me after I had officially “made it” as a rock star.

— on a side note, I’m still waiting for the hordes of women to chase me down the streets of New York City.

Yes, I had dreamed about this moment forever…. and suddenly, forever was now!

On August 6th, 2004, my band was going to be the opening act for Clay Aiken at Musikfest – on the biggest stage of them all! Yes, THE Clay Aiken!

OK, before you start giggling uncontrollably, remember this. Clay Aiken had just placed second in season two of American Idol and was almost on the same level as Justin Bieber, One Direction or any of those other boy bands. That is to say, people were going absolutely bonkers for him. It was the fastest sellout in the festival’s history (6,000+ people) and we had the greatest singer ever in our arsenal who had gotten us the gig…..

…but here I was, standing in the bathroom…a complete nervous wreck!

To this day, I’m not sure how I held it all together. Somehow, my “Rock Star Moment” was here, and I wasn’t about to let it slip away. Grabbing my Les Paul and blue-flamed do rag, I slowly made my way to Bethlehem.

The rest of that evening was a bit of a whirlwind for me. There was time spent setting up gear in front of the stage, testing guitar levels and watching the thousands of people standing in line waiting to get in. Then there was the anticipation of going out there and feeling a rush that no drug could ever deliver.

Prior to August 6th, the most people I had ever played for was maybe 40 in some smoky bar at two in the morning. And even though I was fully aware that they weren’t there to see us, I got to taste the experience of walking out on stage in front of six-thousand people!! Finally looking out, instead of always looking in.

I liked what I saw. 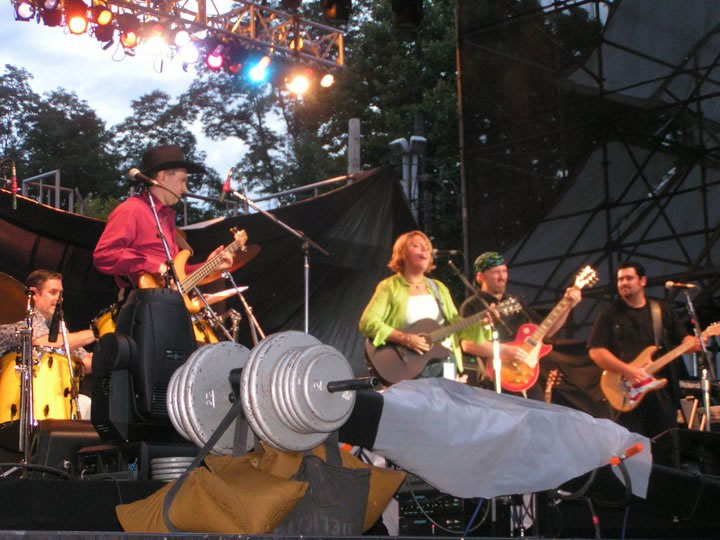 I’ve never had that kind of experience since and most likely never will again. It was through the love of music, a lot of hard work and a little bit of luck that the cosmos aligned for me that particular summer night – and it was the beginning of a special journey we would all share together as a band.

As a seven-year old boy imitating his guitar hero on a vegetable slicer it seemed like such a far away dream. But just the idea of having a dream – no matter how small it might be or how long it takes you to achieve is something that doesn’t fade after the lights finally go out and the music stops. When you realize that dreams do indeed come true, the magic becomes a part of you forever.

Tell me, what are some of your rock star moments?

5 thoughts on “My Rock Star Moment”